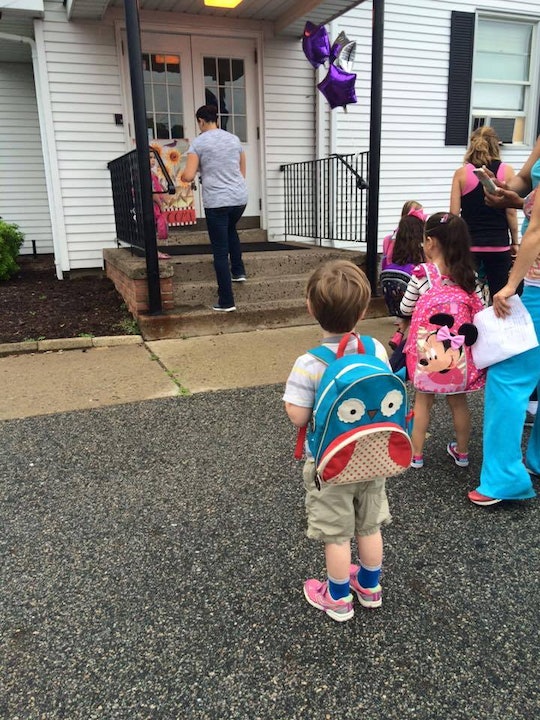 Maybe it's because my son was my first and I had no idea what I was doing. Maybe it's because, as a new mom, I was constantly exhausted which made all my big mom feelings feel even bigger. Or maybe being a mom really is that difficult. Because while raising my son has been a joy, it has also been very, very hard. So hard, in fact, that there have been moments when I've questioned whether or not I was up to the task. But the one thing my son's preschool teacher told me let me know that I was going to be OK... and my son was going to be OK, too.

Everything you need to know about my son can be pretty well summed up in the story of how he was born. Just like in generally unrealistic movies, my water spontaneously broke without any warning at all and I immediately began having contractions. For hours, I thought my son was determined to enter this world and wanted out of my body as soon as humanly possible. But then he changed his mind. He didn't want to budge, and his position made a vaginal labor difficult. More than 18 hours into labor, he went into distress and needed to be delivered via emergency C-section. In spite of it all, it was still a great birth experience. I don't believe in fate, but I nevertheless had the sense that he came out exactly as he was "supposed" to — on his own terms, in his own way, with some struggle, and in need of the forceful but necessary coaxing of people who knew just a little bit better.

His determination and mercurial indecisiveness remained a defining characteristic. Like any kid, he can turn on a dime, but he does so with a level of high drama — unabashed and loud — that, I think, is rarely found in children. And this drama endeared him to us, his parents: those big emotions run across the spectrum, so the highs were higher than I'd ever dreamed of before having children.

But those lows, man. I never knew when they were coming. It wasn't like he was a kid who had A Certain Way Of Doing Things that I couldn't deviate from. He could be extremely adaptable... unless he decided not to be. Or maybe he did have A Certain Way Of Doing Things, but the rules weren't anyone else's to know. What he wanted (or why he didn't want what he didn't want) was often inexplicable to basically everyone around him, but it made sense to him and it was important to him. He was stubborn. He was tenacious. Even when he didn't know what he actually wanted, which was often, he brought that same tenacity and stubbornness. If he couldn't wrap his own head around what he wanted, or didn't have the words or wherewithal to express his desires, he would sort of freeze. But his freezing wasn't the deer in headlights kind. It was... I don't know: what animal screams in emotional, existential panic that throws the entire jungle into hysterics? It was that kind of freezing. Very loud, passionate freezing.

Now imagine this in a school setting. Because that's not something that gets left at any door.

But she could see through the challenge to the sweet kid underneath — the one who was still learning how to just kind of deal.

I knew school might be tough for him. After all, even under the best circumstances, with the most agreeable of children, going into a classroom can be an adjustment. For my emotional, drama-prone, only-child, I was concerned, to say the least.

My son's teacher, I'll call her Ms. K, had been working at the charming church-adjacent-but-not-religiously-affiliated-three-room-preschool for nearly 10 years. She was sweet and sunny and wore bright colors. She could manage a room full of toddlers without raising her voice. She probably spent her entire work-life in a squat so she could be eye-level with the kids because she knew that was important. She clearly adored her students, and she had that uncanny ability to work with 3-year-old children but never seem stressed. She was unflappable and optimistic, but she didn't shy away from telling you if your kid didn't do their best on a given day.

And my kid had a lot of tough days.

He wasn't bad. I knew that and she never gave me the impression that he was. He wasn't mean to other kids. He didn't push or shove or call names. His tantrums weren't mean-spirited, just a bi-product of his inability to hold in his emotions and desires. He was just... a lot, and challenging. But she could see through the challenge to the sweet kid underneath — the one who was still learning how to just kind of deal.

"Kind of a rough day today," she would tell me at pickup, and my shoulders would sag as I'd hear the details.

"I'm sorry," I'd say, genuinely but anemically. "We've been talking to him at home about using words and trying to take deep breaths and learning to be OK if things don't go the way you want." Because we really did have those chats. All the time. And after every chat it felt like progress, so it was disheartening to go back to school and hear, again, about another rough day.

But Ms. K would smile and hold up a cheerful encouraging fist. "This is good! These are good leadership skills. He's passionate and determined and some day that's going to be great for him. We need to encourage that, even as we're teaching him to control it."

Her repetition made this my mantra whenever my son gave me a run for my money.

The first time I heard this was, I'm not exaggerating, life-changing. Because Ms. K, in her wisdom and years of experience, knew something I had not internalized: toddlers grow up. And while they're not fully formed yet, most of the raw materials are there. Few adults wind up with a toddler's inability to get over their own emotions or pitch fits when they don't get their way. She was able to see through time and divine a future in which the same personality traits, honed and properly applied, would yield positive results. That's hard to see not only as a first-time parent, but as someone living with such a capricious and often volatile little person. When you're the only person all those emotions are projected onto, it's easy to feel it as a negative.

"These are leadership skills!" is something Ms. K would tell me frequently, because the sheepish apologies and feeling guilty that my child was being difficult never really went away. Her repetition made this my mantra whenever my son gave me a run for my money.

I've always told myself that I wanted to raise my children for who they were, not who I wanted them or expected them to be. But it took my son's teacher to point out that, maybe, that's easier said than done sometimes. We can't view our babies simply as "the little ones we have to deal with under all possible circumstances" (though they are). They're also burgeoning human beings and, sometimes, things that make them difficult to parent (independence, sticktoitiveness, deep emotions, and, yes, rejecting authority) are the key elements that will make them the kind of people who will change the world.