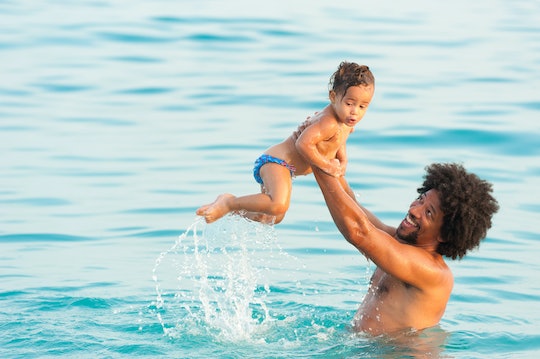 The One Thing No Body Positive Child Ever Hears

The moment my son was placed in my arms, I felt an overwhelming sense of responsibility. I wanted to tell him he was wonderful and capable and intelligent and perfect, just the way he was, because I was acutely aware that, eventually, the world would tell him different. As a woman I am familiar with the hateful messages our society sends all people; gender be damned. Whether it's unrealistic beauty standards or toxic masculinity, kids hear horrible things about their bodies. I didn't want that for my son. I was determined to make sure the one thing no body positive child ever hears, at least from their parents, would never come out of my mouth and into my son's ears. I was steadfast in my silent promise that when it came time to teach my son body positivity, or much of anything at all, what I didn't say would be just as important as what I did say.

And while there are multiple, potentially hurtful and all-around detrimental things you can say to and around your kid that could keep you from raising someone who is body positive, there's arguably one thing worse than all the others:

It doesn't matter which name comes at the end of that sentence. It doesn't matter if it's a sibling or a friend or a classmate or a cousin or a celebrity kid or some distant family member twice removed or a complete stranger. It honestly doesn't matter. The moment we start asking our children to be someone they're not, and pitting them against other children in an attempt to establish "good behavior," we're telling our children they're not good enough. We're saying, "You'd be better, if you were someone else. You'd be better if you weren't you. Don't be you. Be someone else."

I've already experienced multiple instances when my son was acting out or refusing to listen or, you know, being a toddler like toddlers do, and I look wishfully across a room at someone else's well-mannered, perfectly content child. In those instances, I silently (internally) tell my child, "Why can't you act like that?" or, "Why can't you be more that like that kid?" instantly filled with guilt that such a hurtful, although momentary, thought filled my mind. I know my kid has been that kid before; I know that kid has been my kid before; I know that mother has probably wished the same exact thing, when her child was acting out and she noticed someone else's kid that, you know, wasn't. Those reasons definitely contribute to why I keep my mouth shut and keep that thought to myself, but it's not the main reason.

In those moments (and yes, there are many) I remember the promise I made to my son when he was placed in my arms, almost two years ago. He is wonderful and capable and intelligent and perfect, just he way he is, even and especially "just the way he is" means he's acting out and testing my patience and screaming and crying and throwing things and being a tantrum-throwing toddler. I will not pit him against other children; I will not tell him he should be someone he isn't; I will not convey to him that his feelings, even the most inexplicable ones, are not valid and should be stifled because someone else doesn't have them. Those message will not help me raise a body positive, confident young man. Those messages will not ensure that my son values all people.

I don't know what type of adolescent or adult body my son will inhabit. I don't know who he will love or what he will like or if he'll go to college or join the military or have children or travel the world. I have no idea what is in store for him, which is both scary and exciting. I do know, however, that regardless of who he becomes and what he decides, I will not (even subconsciously or accidentally or in a fit of absolute frustration) tell him that he's lacking. I won't tell him that his body should be like someone else's or his personality should be like someone else's. I will not establish an unhealthy thought process, in which my son only finds value in himself when he compares himself to others. I won't let how someone else looks or acts or thinks, define my son and how much he loves himself and his body and his wonderful mind.

Body positivity and self love go hand-in-hand, and I want both for my son. While that means refusing to talk negatively about my body and never judging others and establishing a positive environment that celebrates all body types, it also means watching what I say and ensuring that I don't instill a sense of longing in my son. He was more perfect when he was placed in my arms and he is perfect when he's throwing a fit and he'll be perfect in the future.