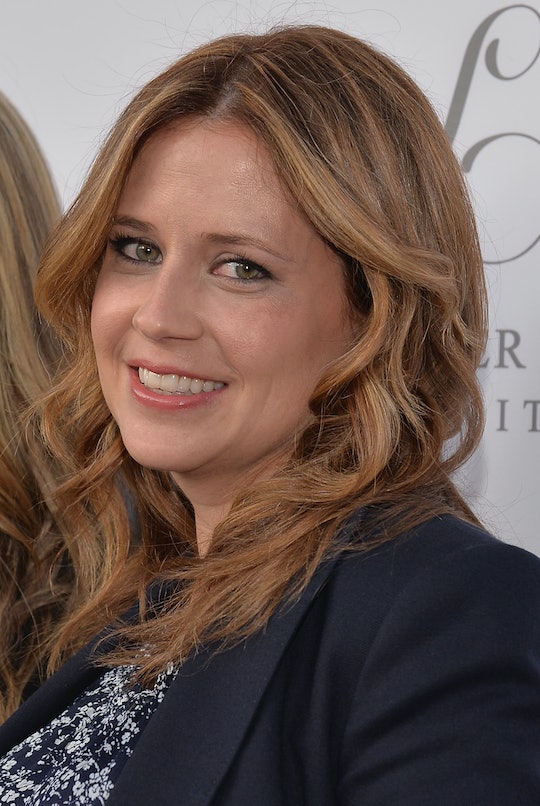 Full disclosure: I am obsessed with The Office. Not in the, "Oh, I enjoy the run-of-the-mill, random episode every now and again," kind of way. I'm talking the, "I could re-enact every single solitary episode to complete and utter perfection so don't test me," kind of way. I don't want to get married because my wedding couldn't possibly be as wonderful as Pam and Jim's so, honestly, what is the point?! I watched entire seasons of The Office after I lost one of my twin sons at 19 weeks; consoled by the cast's never-ending hilarity. I watched entire seasons of The Office when my son was born and I was struggling with postpartum depression; laughing when I thought I'd forgotten how. And I watched entire seasons of The Office when I struggled to breastfeed, because the one thing Pam got so right about nursing is the one thing I desperately needed to hear.

The Office is one of those shows that can instantly make you feel surrounded by friends, even when you're alone and in the dark and it's 2 am and you're crying because breastfeeding seems impossible. I had made the choice to breastfeed my son, but I didn't realize that, sometimes, the choice can be taken away from you or made for you or cease to exist entirely. If I wasn't successful at breastfeeding (if I didn't adequately provide my son with enough milk to sustain him, or couldn't get my son to latch, or became too ill to breastfeed safely) the choice of how I was going to feed my son would have be made for me. And because I'm a sexual assault survivor and breastfeeding was a trigger, I experienced so many moments of frustration and fear, when breastfeeding proved to be difficult, and I thought I was a bad mom because of it. Thankfully, I had Pam to turn to.

For those who don't know and/or aren't as obsessed with the nine-season show the way I am, after Pam gave birth to her first baby she struggled to successfully breastfeed. In the hospital, she stressed about being able to get her child to latch; a common problem that can fill a mother with self-doubt and anxiety and, at times, self-loathing. Pam calls on the knowledge of a lactation consultant, who is able to assist her momentarily, but as soon as the consultant leaves, Pam continues to struggle. Worried that she won't be able to successfully breastfeed and contributing her inability to her chances as successfully parenting in general, Pam feels scared and defeated and unsure if motherhood is something she can handle.

Now, raise your hand if you've ever felt that way before. Oh, hello everyone.

Which is why, when she does get her baby to latch on her own and breastfeeds without help or support, Pam nails the one thing about breastfeeding that is rarely talked about:

Women (mothers especially) are constantly being told they must act a certain way or make specific choices, in order to be the "best" woman or mother. If you choose to breastfeed you're somehow a "better" mom (according to some) but if you choose to breastfeed in public you're somehow a "worse" mom (according to others), and it's all just hypocritical nonsense that criticizes a mother's choices at every turn. It's honestly enough to exhaust you completely, but what happens when you don't get the chance to make a choice? Like, at all? What happens when, even if you do make the decision to breastfeed your kid, it's difficult or painful or even impossible? Should we really be adamantly proclaiming "breast is best," when we know all-to-well that even though breastfeeding is beneficial to children and mothers, it's also difficult and frustrating and it doesn't always come easily? Especially when we know that mothers are constantly judged and endlessly shamed and (usually) the most hard on themselves.

Which is why, instead of hearing "breast is best," women really need to hear, "Breast is great if that's your choice, but it's also really difficult and can be really painful and if you struggle at breastfeeding not only are you not alone, you're definitely not a bad mom." I know, I know; it's not as succinct as "breast is best," and it doesn't rhyme, but it's definitely more inclusive and inclusivity should always be the goal. And that's what Pam highlighted (in a wonderfully hilarious way) when she stumbled on her early parenting path and towards successful breastfeeding, is so important. In that episode, we were given a real, honest look at just how hard it can be to feed a child from your own body, and what that difficulty can do to new mothers. It can make us all feel alone; make us all feel defunct; make us all feel like we're failing before we've had the chance to really start; and it reminds us that, hey, it's normal.

Self-doubt is part of parenthood; so are constant struggles, endless mistakes and frustrating difficulties that will leave you feeling less than capable of taking care of a precious, brand new, tiny life. Nothing makes that more obvious than breastfeeding, which is why the judgement and shame and endless personal opinions bombarding mothers just needs to stop.

Thankfully, and although media is notorious for sugar-coating otherwise painful processes, we have Pam to remind us that just because a part of motherhood isn't easy, doesn't mean you're any less of a mother. In fact, it probably means you're doing everything right and being the best mother you possibly can be for your little.