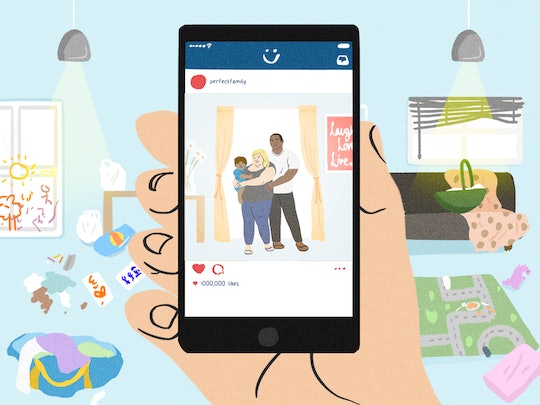 Becoming a mom seems to occur right alongside the development of a sense of responsibility that can feel crushing at times. I think every mom asks herself, at some point, "Am I going to be a good mom?" You are, after all, about to be in charge of taking care of another human. It can be an overwhelming concept to consider in a vacuum, but when you factor in how you perpetually see how successful other mothers appear to be at mothering plastered all over your social media channels.

When I was pregnant, I spent a lot of time looking at all of those amazing Pinterest and Instagram moms, baby on the hip, creating delicious meals for their families, all in their gorgeously decorated, pristine homes. And I won’t lie: I got down on myself pretty quickly. But two kids and four years later, I have gained a bit of perspective that I think it’s really important to share with new and expecting mothers: If you think you’re going to be a shitty mom, you are not alone.

All of us have moments of doubt, insecurity and guilt over making what we often perceive as the wrong choices. That includes the women that you hold up as role models; the “perfect” moms who appear to have their shit together. I guarantee that they’ve had their share of dark nights of the soul, when they found themselves yelling at their toddler instead of listening, or forgetting to change a poopy diaper, and hated themselves for it. We all make mistakes. It goes with the territory.

But you know what? Here's the truth about all of this that you have to know, and really force yourself to believe: Some new mom is out there holding you up as their role model. I assure you, they are.

Some of us become this woman on purpose, and others of us would never imagine we could be anyone's role model, but for every mom on social media who makes you feel inadequate, there's another mom who feels that way about you.

Despite all of the moments you will undoubtedly go through when you feel like you’re the worst mom ever, that is not what others see. We often hold ourselves to impossible standards as mothers, which makes it that much easier to feel like we’re letting our kids down.

It's important to allow yourself to make occasional mistakes, and not beat yourself up over them. And I'm not even saying that we should feel better about someone making us feel bad because we're making someone else feel bad. Something about an eye for an eye; it doesn't add up. I'm just saying, it's all perception. If you're someone's "mom goals" and you know how flawed you are, then think about the fact that the women you idolize as the "perfect moms" are probably at least as full of off-camera fallibility as you are. We're all human. We're all doing our best. Some moments, our best looks incredible. We don't share the other moments.

And also, remember that children come into your life to entertain you. No, wait... Is that right? No, they're in our lives so we can terrorize them...

Hmm. No, that's not right either. I think they are actually meant to be loved and raised to the best of our abilities. So try not to be too hard on yourself, if you make the occasional mistake. It's going to happen, and it is completely normal. And if your kids end up needing a bit of therapy, I mean, hey, don't we all?