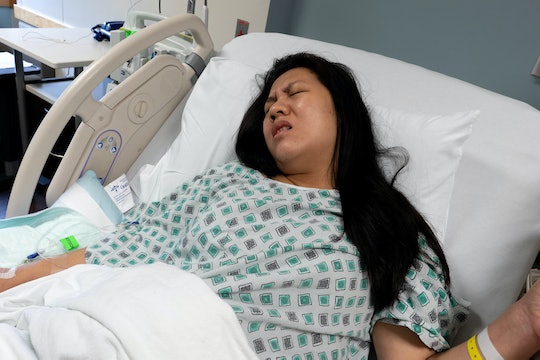 The One Thing You Should Give Every Mom Who's In Labor

So, your loved one — partner, wife, friend, daughter, sister — is gearing up to have a baby. This is an exciting time for all of you and, if she's invited you to be a part of the labor and/or birth process, you have been given a tremendous honor. There are few times when a woman will feel more vulnerable than when she is in the throes of labor, but you can help! In fact, I'm going to tell you the one thing you should give every mom in labor because, as someone who has had two children and two intense, long labors, I can assure you that even under the best of circumstances it's no picnic.

On September 3, 2011, at 3:00 a.m., I went into labor for the first time. I'd read all the right books and watched all the suggested videos on various pregnancy websites, so I knew that labor rarely started the way we so often see it in the movies, i.e. without warning and a gush of breaking waters. That is, however, exactly how I went into labor. I was excited and, at first, pleasantly surprised that contractions were totally manageable, both in time and intensity. As you can imagine and probably already know, that eventually changed.

Before I knew it my contractions intensified and I quickly realized the time to go to the hospital was approaching. I also knew that once I got to the hospital I wouldn't be allowed to eat until that baby popped out of me. (I cannot overstate how important food is to a pregnant woman.) I asked my husband to be a dear and go get me a pumpernickle bagel with veggie cream cheese from the bagel shop seven blocks away. Not from the bagel shop around the corner or the one three blocks down. I needed it from that one place, and it was the one thing I really wanted. And you know what? To this day, I appreciate the gesture and the actual bagel so, so much. It plays a prominent role in how I think about my first labor.

So that one thing you should give every laboring woman? No, it's not a bagel. Hell, it's probably not even food in general. You know what it is?

Anything. She. Damn. Well. Pleases.

If she wants a cookie, get that woman her a cookie. If she wants to be reminded that she is a birthing queen, start Googling where to get a tiara at 5:00 a.m. If she wants you to accompany her to the hospital in one of those inflatable T-Rex costumes, put it on without complaint (and prepare to go viral as soon as you put those pictures up on Instagram). Some women will want a steady stream of physical contact and empowering platitudes whispered into her ear. Others will require total silence. It all depends on the person, and it's up to you to provide whatever it is she needs in that moment.

The pumpernickle bagel with veggie cream cheese was my one thing. It took on a special significance on top of being an important, immediate need (because I was very, very hungry and in need of the kind of comfort only New York bagels can provide). It was a symbol that I was loved and supported by a partner who was going to do anything he could to make my birth exactly what I wanted it to be. Just about every mother I've talked to has a similar "thing" that she'll incorporate into her labor story. (For the unlucky ones, that can also be the thing they didn't receive that they really needed.)

Your job as a labor and/or birth partner is to find out what the laboring woman in your life needs and give it to her to the best of your ability. A good thing to do is to talk about it ahead of time, because she might have some very solid ideas in advance. However, be prepared to make a new plan, because sometimes what you think you want ahead of time turns out to be the opposite of that. For example, I'd told my husband months ahead of time (and repeatedly) that I needed him to be in awe of me, to rub my back, and tell me I'm beautiful and just be really affirming during labor with my second child.

And when he delivered and did exactly what was asked of him I said: "Ugh. No. Not like that. Just shush."

And you know what? He did that, too. He shushed his mouth. And he was awesome.

If you think about it, the requests a woman makes in labor are going to be the last truly "selfish" requests she makes for a long time. After her baby is born she's always going to be considering another person. Her child will figure into all other aspects of her life, at least for a while. Right now, essentially for the last time, she's only thinking about herself.

So show your laboring loved one that her decision to make you a part of this was not misplaced. Help her get the one thing that's going to serve to let her know that you love her, support her, and will be in her corner long after labor is over and the real work begins.