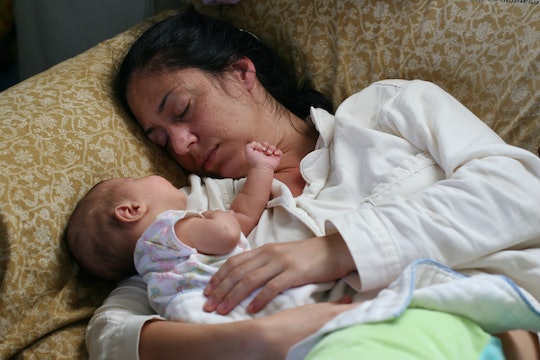 Having a baby is no easy task, but for some women, getting back into the swing of things after delivery is where you need some real skill and strength. The postpartum life is no joke, and it literally affects everything from your work to your mental health to sex with your partner. Society puts a lot of emphasis on life after baby, whether it's losing the weight or balancing your new life, but expecting sex to be the same? Not possible. In fact, there's one thing you should never be ashamed to say while having sex after having a baby:

I mean, come on. Yes, sex feels good. Yes, there are tons of benefits to sex. Yes, it can bring you closer to your partner. But do you know what else touts all of those things? Sleep. Glorious, lovely sleep. And after having a baby, you're not getting nearly enough of it.

I think, in general, most women are interested in having sex after delivering a baby. A study published in The Journal of Sexual Medicine found that at three months postpartum, women were engaging in sexual intercourse frequently after birth, but we're also interested in masturbating even earlier. Proof that having a baby doesn't deprive women of having sexual needs and desires, but sometimes? They're just too damn tired. The same study found that those who experienced a low desire for sex didn't blame breastfeeding or a disinterest in sex, but cited fatigue as one of the reasons to pass on intercourse.

Cheers to that, ladies. Because holy sh*t, people are not joking about the fatigue new moms feel. And if you have to decide between getting some shut-eye and having sex? You should never be ashamed to use your pillow for sleep instead of some fancy missionary sex position.

And on a serious note, sleep deprivation is a very real thing and can negatively affect your life. Director of the Sleep-Wake Disorders center in New York, Dr. Margaret Moline, told Parents that a lack of REM sleep can cause memory lapses and make tasks more difficult, which gives you that foggy, out-of-it feeling. In fact, a study published in Psychological Science found that when exhausted, your brain can actually create false memories. So those days where you thought you changed a diaper, only to find that your baby has been sitting in the same one since 8:00 a.m.? You can blame your sleep deprivation on that.

Beyond the actual effects of exhaustion on your brain, you're also just tired, so don't let any guilt about skipping out on sex stop you from snagging an opportunity to sleep instead of getting it on with your partner. While I firmly believe that sex can be even better post-baby than before, it can't compare to the joy of feeling like a human being again. And if the sex isn't all that great, you're uncomfortable and sore, and worried your boobs are going to leak a gallon of milk on the bed? All the more reason to say, "Actually, honey. I'm not going to cum. I'm just going to go to sleep now."