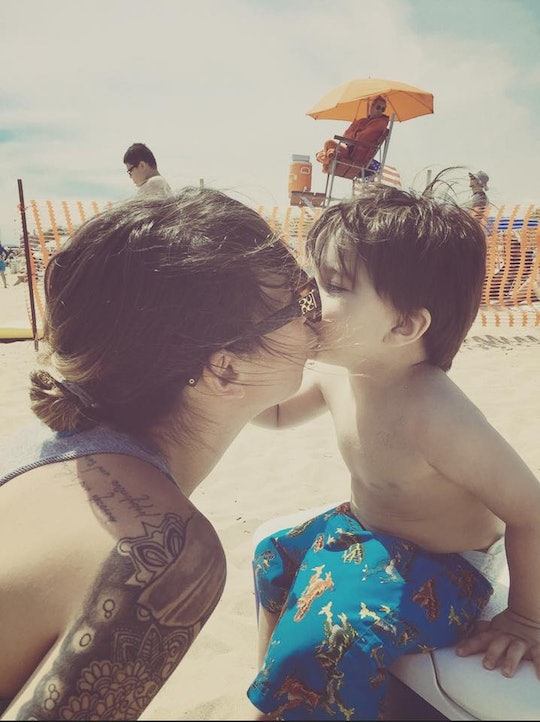 From the moment I became a mother, I was inundated with thoughts and opinions and certain, particular beliefs; many of which I listened to and valued. From doctor's and nurses to fellow mothers and my own mom, who have "been there and done that," I listened to the things they said to me, about me, and regarding motherhood. I wanted to "do it right," and very few things help like an outsider's perspective. I learned fairly quickly that attachment parenting worked best for me and my family. I also learned that there is one thing you should never say to a mom who chooses attachment parenting because, sadly, that one thing was said to me on multiple occasions.

While I continued to value the genuine opinions of others, I realized that when it came to attachment parenting, misinformation and judgment and shame had shaped people's viewpoints to the point that, well, they couldn't be supportive. I heard that I was making a mistake; that my son wouldn't be able to, one day, function without me; that I was stunting his growth; that I was being selfish; that I was looking for something to "set me apart" as a mother. I mean, I heard it all. The worst thing I heard, however, was the unfounded argument that attachment parenting, in some way, made me a bad feminist.

I mean, I heard it all. The worst thing I heard, however, was the unfounded argument that attachment parenting, in some way, made me a bad feminist.

Attachment parenting is a parenting philosophy that aims to promote the attachment of mother and infant through various decisions and methods, like maternal empathy, quick responsiveness and constantly physical contact. Until I practiced this particular parenting method, I had no idea what attachment parenting was. I didn't set out to attachment parent for my own benefit, however there were so many benefits of attachment parenting that I very much enjoyed (and continued to enjoy). I was able to breastfeed my son, which cut down on costs (formula is expensive) and made it easier to feed at night. I co-slept with my son, which gave me and my partner better night's sleep, made night feeding's a breeze, and allowed me to curb that new-mom anxiety, because I could simply look over and see that, yes, my son was still breathing. I baby wore because it was simple and affective and strollers are huge and bulky. I did what worked best for me and my son, so I was shocked to hear that in doing so, I was making an anti-feminist decision.

The argument made, my some, was that attachment parenting doesn't bring into account the needs and wants of the mother, primarily the need for space. If a mom is attachment parenting, she's probably a stay-at-home mom, which somehow means she isn't feminist because she doesn't work. I was working at the time, but from home, and apparently working-from-home was not a feminist enough decision, and my choice to attachment parenting only made my perceived anti-feminist life, worse.

As a proud and open feminist, this particular criticism stung. However, it didn't take me long to realize that it was also completely fictitious and unfounded and just, you know, wrong. I wasn't attachment parenting because it was the only option available to me. Attachment parenting, for me, didn't mean that I was forever chained to my child; like he was some prison sentence that I was forced to endure. I had options and I did my research and I made the best choice possible, for me. That, is feminism. If a woman is a stay-at-home mom because she chooses to be (and she believes in gender equality) she is a feminist. To tell women that their choices, even ones viewed as "traditional" or "selfless" in nature, are "wrong" and "anti-feminist" just because they don't look like a giant middle finger to the patriarchy, is to go against everything feminism stands for. We have options. We're exercising those options.

I had options and I did my research and I made the best choice possible, for me. That, is feminism.

Attachment parenting gave me the peace of mind I needed, so desperately, after a difficult pregnancy, labor and delivery. I was pregnant with twins, but lost a twin son at 19 weeks. I had to birth a son who was dead, and a son who wasn't. I was traumatized and I was scared and being able to experience the closeness that attachment parenting provides, gave me the opportunity to relax and just enjoy being a mother and see that, no, not everything will go horrifically wrong. I did what was best for me. I looked at my needs and evaluated what I wanted and it was attachment parenting that could facilitate both, while simultaneously aiding my son.

While I am more than happy that feminism has become a "main stream" idea and more and more people (men and women) are happy to call themselves feminists, the downside has been preconceived notions of feminism that are, well, inaccurate. You don't have to forgo children in order to be a feminist. You don't have to be a working mother in order to be a feminist. You can do whatever it is you want to do, ladies, and that is because of feminism. So, while I continue to listen and value the thoughts, beliefs and opinions of others, I'm also careful to weed out the ones that truly matter, from the ones that don't. I'll smile and nod, all the while knowing that my choice to attachment parent was the best choice for me and that, among other things, is why it was a feminist choice I'll never, ever, apologize for.