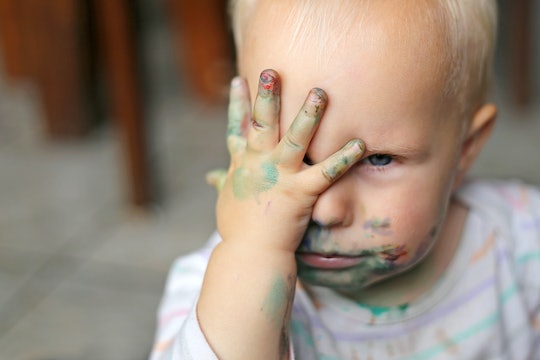 Forget terrible twos, terrifying threes, and all the tantrum-throwing times in between. Why aren't we talking about how awful 15-month-olds are? Now, before everyone starts bashing me for bashing babies, I love my babies. In fact, I have a 15-month-old child right now and that kid is without a doubt the best kid ever. But you know what else that kid is? The worst. I'm not alone, either, because other parents have made it a point to share plenty of reasons 15-month-olds are the worst.

Reddit user PasDePamplemousse engaged in a self-proclaimed "light-hearted vent" about the recent discovery that the "terrible ones" also exist. In fact, this user says they've never seen such a strong-willed individual. Their 15-month-old daughter throws the full weight of her body around when forced to leave preferred activities. Not surprisingly, other parents flocked to share their own experiences of abhorrent 15-month-old behavior, because solidarity is powerful, my friends.

My own 15-month-old baby, admittedly, is probably the most mild-mannered and easy-going of my three children. Yet there is an internal fire that burns, exploding out through their (we use gender neutral pronouns) appendages in tantrum-like fashion when they don't get their way. In fact, as I write this my precious 15-month-old child is screaming disgruntlement at having been removed from their older brother's back by papa. My little one throws their head back in dramatic complaint, squalling with a scrunched face for mama to come save them from this unfair persecution. Sound familiar?

Let's see what drama other 15-month-old hellions are causing, and why it's (one of the many and seemingly unending) worst stages of childhood: