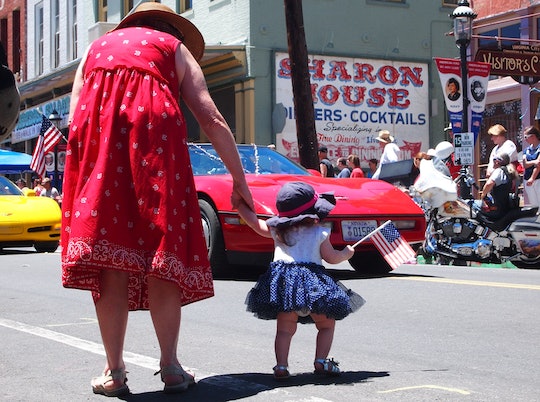 The Real Reasons I'm Raising My Kids To Be Patriotic

Lately it's been hard for me to muster feelings of national pride. It seems like for every step forward, we take two or three steps back as a country. I worry earnestly and often about the future of our country, not so much for myself but for my three children. I worry that they'll still be facing the same slow-moving battles we are fighting today. I worry that they might lose hope, like so many Americans have already. I worry that I don't have the foresight to even worry about the issues they will face in their lifetimes. But even amidst all that worry, I'm still raising my kids to be patriotic, because I want them to love our country enough to change its flaws.

I know that America is far from perfect. In fact, there is so much room for improvement, and so much stonewalling against improvement, that it makes my head spin. I cannot believe we are still fighting to keep women's reproductive rights, the same rights we as women have had since before I was even born. It seems unreal that we have watched children be slaughtered by a madman, that we've stood idly by mass shooting after mass shooting, and still our gun laws haven’t changed. It's crazy to me that we gloss over issues like mass incarceration and debt in favor of fighting over transgender bathroom laws or about who's going to build a wall to "protect" our borders.

I want them to have hope for their future, and feel invested in this country. I want them to love America in the way I sometimes forget to.

There are so many things about our country that could and should be better. I know it's easy to say that things aren't perfect right now because there's always room for improvement, but that's not it. Right now, I feel like America is failing, miserably, in more ways than I can count. Hell, in more ways than I even know. There are hardly any areas where America can boast being number one, and the areas where we do lead are not things we can be proud of, like having the highest rate of incarceration or the most expensive (and least effective) healthcare in the world.

It is hard to keep hope when faced with such frustrating facts. I hate seeing our country move in the opposite direction of progress on a regular basis. And I know how difficult it is to feel patriotism when our country’s system is so terribly broken and change moves at such a glacial pace. There are very few instances when I feel truly proud to be an American — like when I’m standing in a National Park or exercising my right to vote. But none of my disappointments stop me from being a patriot, and wanting my children to be patriotic as well.

My patriotism does not require blind love of my country. It requires loyalty in spite of disappointment. It demands the desire to support our country and its people and help it grow toward its full potential. I want to leave this country better for my children. I want them to want better than whatever I can help accomplish.

The thing is, this is my America, in all its messed up glory, and if I don’t like it, it’s up to me to keep fighting for change. I want my children to know that it's their right to do the same.

I do not want my children’s generation learning apathy from my own. I do not want them to throw their hands up and say all hope is lost, or to believe that their voices don't matter. I want them to love this country and feel connected to it. I want them to see the injustices and failures within our system and get fired up. I want them to care enough to change the flaws of our country, and that can only happen if I instill in them a love for America that outweighs their frustrations.

There are moments when I falter, when I too want to give up or feel complacent about our failures. There are times when I desperately want to distance myself from the failings of our nation, to say, “this is not my America.” But the thing is, this is my America, in all its messed up glory, and if I don’t like it, it’s up to me to keep fighting for change. I want my children to know that it's their right to do the same. It’s my job to keep raising my voice, to keep my patriotic flame burning. Because someday I will pass that torch to my own children, and I want their patriotism to burn brightly — so they can bring their light into the dark places that need change.