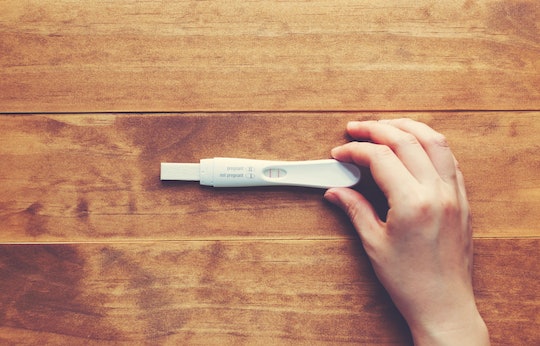 Are The "Silent Months" Of Pregnancy Bad For Women?

In the first trimester, women face a barrage of information that can be incredibly overwhelming — so much so that the first trimester is generally considered the ~absolute worst~. Your body is changing dramatically (and quickly), you’re sick in ways you didn’t know were possible, your hormones are everywhere, and your entire inner circle may be driving you crazy for all sorts of reasons. But there’s another factor that can make those initial 12 weeks burdensome: Deciding whether or not to tell family and friends that you’re expecting. Since most miscarriages occur before the 12th week of pregnancy, per the Mayo Clinic, women often choose to keep the news under lock and key until the second trimester begins. That’s why the first trimester is also known as “the silent months.” But keeping quiet is far from easy to do, especially if you’re anxious about your pregnancy or eager to start telling everyone you know.

Familial circumstances can have a big effect on how women behave during the silent months. A few months into Jessica Meyer’s second pregnancy, her sister-in-law suffered a subchorionic hemorrhage and gave birth at 22 weeks. Her little girl, Meyer’s niece, lived one week in the NICU.

In the aftermath of that tragedy, Meyer said she had to factor in how her own pregnancy — which was the result of more than a year of IUI (intrauterine insemination) treatments — could be viewed by loved ones.

“My entire family and my brother and sister-in-law's community was extremely heartbroken, but supportive,” Meyer says. “My pregnancy has definitely been celebrated by my students and colleagues. However, I keep quiet with my family. I don't want to celebrate in the face of their grief. It just feels disrespectful to them and to the memory of my sweet niece.”

A growing chorus have called for a reevaluation of this standard, arguing that shunning women into silence may only add to their trauma if they do end up miscarrying.

For other women, it comes down to personality.

“I wanted to share as soon as possible,” Elise Kohan, a elementary school teacher in Washington, D.C., tells Romper. “I’m also an extrovert, so it was difficult waiting to tell some people, especially on social media.”

Kohan, who had won a bodybuilding competition the week before she conceived, said that the fear of miscarrying didn’t stop her from indulging in her extroverted tendencies.

“I told my immediate family the day after I got a positive test result,” Kohan said. “I waited until eight weeks to tell my friends. I believed that if I were to miscarry, I’d want my close friends to be my shoulders to cry on — I wanted them to be included in my joys and sorrows.”

“A lot of what you read online says to wait until 12 weeks to share your pregnancy with others,” Tenorio said. “But after experiencing loss eight weeks into my first pregnancy, it was simple for me to decide when to share my pregnancy and with whom.”

Tenorio’s first pregnancy was ectopic, and she had to have surgery and lost her right Fallopian tube. Despite those difficulties, she was set on being open with loved ones when she became pregnant for a second time.

“To me, there's something comforting about being able to talk about loss with people who care rather than keeping it private,” Tenorio explains. “Saying it out loud helped me move on, and the more I talked about it, the more others shared their stories. It made me realize I wasn't alone.”

With her second pregnancy, as soon as Tenorio took the test, she FaceTimed her mom to reveal the big news. A few days later, she told a handful of her closest friends.

“It was always framed around, ‘I'm telling you because I know if something goes wrong, I'll be able to talk to you about it,’” Tenorio says. “Even though I was scared of experiencing loss again, I was so excited by the prospect of having a baby. I can't imagine keeping it a secret from everyone for 12 whole weeks.”

“The 12-week rule” is a contentious subject among expecting mothers. A growing chorus have called for a reevaluation of this standard, arguing that shunning women into silence may only add to their trauma if they do end up miscarrying. What’s more, since pregnancies often don’t feel legitimate until they’re made public, experiencing a miscarriage may further invalidate that pregnancy since the loss typically occurs privately. The problem, of course, is that miscarriage grief is very real no matter when — or how — it takes place.

And the 12-week rule can be much harder to follow for first-time moms who are often bursting with excitement, ready to tell the first person they see on the street after getting that positive test result back.

“I really dislike the stigma that tells us we should wait to share about pregnancy until you're in the 12-week ‘safe zone,’” says Mindy M., a marriage and family therapist in Nebraska who is currently expecting her first child. “Anytime a woman is pregnant, a tiny miracle has been created. Why wouldn't we want to share our joy with others?”

Hiding your pregnancy is hard.

After Mindy’s first pregnancy ended in miscarriage, she was “somewhat scared” to share the news of her second pregnancy, although she wanted to do so as soon as possible. Her husband, however, was leaning toward waiting it out.

“He wanted to wait until after the ultrasound,” Mindy says. “He didn't want to share such great news out of fear of that another miscarriage would happen.”

Ultimately, they decided to tell their parents three weeks after finding out themselves and then the rest of family after the ultrasound.

“Hiding your pregnancy is hard,” Mindy says. “Friends and family would question how things were going since they knew we were trying again. I was pretending to drink alcohol, and we had one family member watching me like a hawk — she was totally onto me.”

When asked what makes the silent months so challenging, Meyers said that it’s the realization that women go through so much to become mothers, and all of that is often amplified during this unique time.

“So many women are struggling with infertility or infant or child loss,” Meyers said. “In the event of loss or complications, many do not know how to support or empathize with the mother. Perhaps this is naivety or some ingrained problem with society. I have no answers, but I respect a woman's choice to share when she wants.”