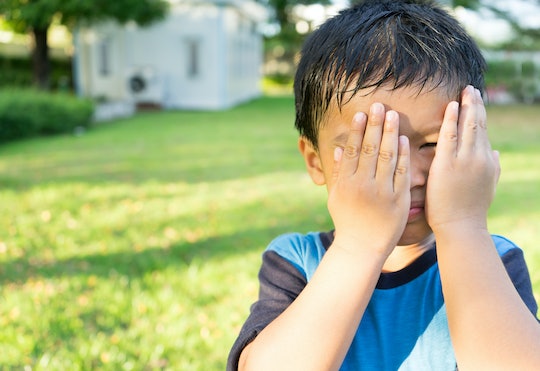 Recently, in my parents' house, I found a bunch of my old drawings, writing, school projects, and report cards from nursery school through high school. From that very first report card to the very last, I was invariably described as "enthusiastic" and "social." In other words, I never shut up. In fact, I still don't. My great fear in life is that I'm going to be one of those overly friendly old ladies who annoys cashiers. Given that information, you may wonder what I could possibly teach anyone about what you can do for your quiet kid, but hear me out (especially you, my fellow extroverts), because I've learned a few things over the years.

I have two children: a soon-to-be 6-year-old boy and a 3-year-old girl. No one could ever accuse my daughter of being quiet. She's always bubbly, gregarious, and a natural executive. My son, however, is another story. I once asked him what he wanted to be when he grew up and he answered, with a broad and excited smile, "Alone in my room!"

Too often, adults view children as little dolls to cater to our desire to interact with something adorable; to feed our own egos.

They say a picture is worth a thousand words, so let me put it to you this way. We recently had some friends drop by. I announced to my children, "Hey kids! Lily, Ella, and Julia are here!" This was my daughter's immediate response:

Adorable, right? I mean, just look at her face! Look at that smile! That, my friends, is the face of a child who sincerely loves being around other children; who revels in the presence of other people's company; who enjoys being loud and vivacious regardless of who is around.

Here, for comparison's sake, is my son's reaction:

It's not that he's always quiet and shy. In fact, some days, or in certain situations, my son is every bit as "enthusiastic" and "social" has his mother ever was. But in all things, my boy is probably best described as "mercurial," so there are other times when he actively keeps to himself. Sometimes it's just for a little while while he adjusts to something new. Other times it's a day-long mood. In those moments he doesn't want to talk, explain, or be social in any way. Trying to force the issue does not go well for anyone involved. I think of these as his "daddy moments."

I learned how to treat a quiet child through my relationship with his quiet father. What I learned can basically be summed up in a single, easy-to-perform action.

You see, whereas I am a delicate (but majestic) social butterfly who would wither in anguish if she didn't have at least one meaningful conversation every single day, my partner could probably go weeks without social interaction and be totally fine. When he was a child, his preschool teacher expressed concern over the fact that he spent playtime under a desk reading. He and I have observed that we're the same person with the same opinions and ideas, but polar opposites when it comes to temperament.

They say opposites attract but, before we got together, that hadn't been the case for either of us with our romantic partners. We tended to stick with our own: introvert with introverts, extrovert with extroverts. Truth be told, I was often annoyed by conspicuously quiet people. "Get over yourself," I'd think to myself. "Stop thinking the rest of us are judgmental assholes and just talk." My partner was similarly biased and considered talkative or explicitly social people to be boors who just assumed everyone was interested in everything they had to say.

One night, relatively early into our courtship, we were driving up the California coast in silence — a silence my partner uncharacteristically broke. "You know what I like about you? You know how and when to shut the f*ck up." He paused. "That came out wrong. I just mean you don't feel the need to fill up a silence when there's nothing that needs to be said. A lot of people don't know how to do that."

I was a little taken aback, only because I had never considered myself someone who was particularly good at or with silence. But his pointing that out to me made me instantly realize that it's not that I was uncomfortable with silence, but I'm a people pleaser. On top of that, I'm someone who deeply values words of affirmation. So when I was confronted with someone else's quiet, I often worried they were uncomfortable, and I would talk to assure them "Hey, I'm here. I'm good. Are you good? I'm interested in listening to you if you want to talk." My partner's silence was different. I liked his quiet because he was so confident in it, which instilled in me the confidence (and to my mind, permission) to comfortably bask in it. I liked it because it had become our silence without my noticing.

Some children engage in social situations differently than others. Others will eventually join in, but they just need time to assess their situation and figure out how and when they want to approach.

We continued to observe and discuss our social styles and dynamics over the years. We gained insight from one another. I no longer considered quiet people self-centered misanthropes. He no longer thought of talkers as mindless phonies. We learned to understand "the other."

This all helped us move through the world in general, but was especially useful in understanding our son when he came out a perfect and unpredictable combination of the two of us, equal parts ebullient and taciturn. I learned how to treat a quiet child through my relationship with his quiet father. What I learned can basically be summed up in a single, easy-to-perform action.

Don't try to make your quiet kid not a quiet kid.

There's a societal expectation (because, if we're being honest, society is more extrovert-friendly and focused) to be outgoing. This can be especially true for children. Too often, adults view children as little dolls to cater to our desire to interact with something adorable; to feed our own egos. We want kids to be pliable, obedient, charming, and sociable. Never mind if the child in question isn't interested in being social. Quiet children are coaxed to "come out of their shell" or "talk to [whomever]" or "play with the other kids."

What if they don't want to? Is that always such a bad thing? Some children engage in social situations differently than others. Others will eventually join in, but they just need time to assess their situation and figure out how and when they want to approach.

Remember The Story of Ferdinand?

Once upon a time in Spain, Ferdinand was a little bull who preferred sitting quietly under a cork tree and sniffing flowers to fighting with the other bulls. "Sometimes his mother, who was a cow, would worry about him. She was afraid he would be lonesome all by himself." But when Ferdinand assured her she preferred to enjoy his time alone, "his mother saw that he was not lonesome, and because she was an understanding mother, even though she was a cow, she let him just sit there and be happy."

We all need to be like Ferdinand's mother and learn to be comfortable in our quiet children's silence.