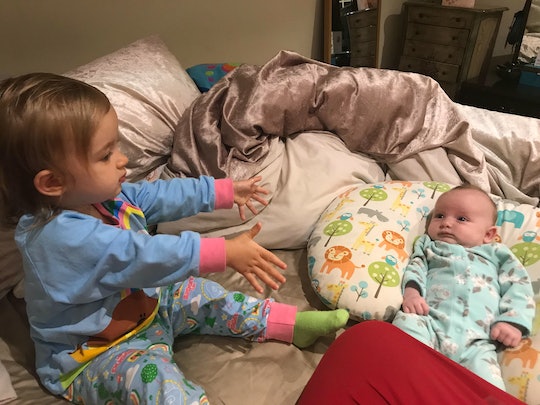 I would like to say that I was overcome with nothing but joy and wonderment when I found out I was going from one child to two. In truth, the immediate weeks (OK, maybe months) following the news were spent in a perpetual state of panic. I loved being a mother to my then 1-year-old. I loved watching her grow into her own small human with distinct personality traits. Reaching a point of parental satisfaction had taken time, though. Having a baby before I had necessarily planned on starting a family had landed me into a debilitating identity crisis that made me question my abilities as a mom, my abilities as a professional, and, basically, the validity of the person I was and the goals I had.

The thought of doing it all over again was scary. I spent so many of the early days of motherhood crying on the toilet, or crying along with my baby as she struggled to nurse, or crying when I'd see photos of my child-free friends going dancing whenever they so pleased. I spent so much of that time exasperated by my inability to "do it all": to balance parenting with work and personhood in such a way that all facets of myself were somehow fulfilled. It had taken almost a year to accept the idea that an even balance (that is, an even distribution of my time and energy into everything I care about) probably wasn't going to happen — and that this was probably OK. So, did I really want to go through it all again?

It was a question I deliberated with as much thoughtfulness and self-awareness as I could. In the end, after weighing out every option, I concluded that two kids were always in my long-term plans. Even if the timeline was a little different to what I had always imagined, what it came down to was that, for me, there was no way I would regret having a second child — whereas the what ifs of not having one might become torturous.

Funnily enough, I needn't have worried quite as much as I did. Some things are definitely harder when there are two small children in the equation, but for the most part, the transition from one to two kids has been far easier than from no kids to one.

When my eldest, Luna, was born, what struck me most about becoming a parent was just how full-on it was. Even as a newborn — when her mobility was limited and her naps were plentiful — nothing was a simple as it had once been. A trip to the grocery store meant packing an entire bag of the baby's necessities. Vacuuming the carpet while she was sleeping meant putting her somewhere in the house where she wouldn't hear and be woken, and setting up a baby monitor along the way. A trip out on my own? That meant days of preparation involving pumping milk, ensuring whoever was watching her understood the routine, and stocking up on enough diapers, baby wipes, sterilized bottles, and clean clothes to make it through my absence.

There was almost never any me-time. No time to pick up a book, do my makeup, go for a walk, or turn on Netflix. Even with the help of my partner, in-laws, and a sitter, any "spare" hours I encountered went to other essential tasks outside of parenting. Maybe I needed to catch up on work. Maybe the house needed cleaning. Maybe I needed to cook some real food instead of surviving off takeout and pre-packaged snack packs.

I had acquired a kind of strength that comes with accepting that a perfect balance of 'mother,' 'writer,' and 'human,' was not possible — and that I did not have to berate myself for this.

I anticipated that parenting would be difficult — but I did not anticipate what the lack of alone time would do to my mental health. I did not anticipate how much anxiety I would develop. It was anxiety largely rooted in feeling like I wasn't doing "enough" in any facet of my life: Not enough to be a good mom, a valued worker, a decent friend, a caring partner, or an independent human being.

It was the fear of slipping into this anxiety as a result of even less me-time that worried me the most throughout my second pregnancy. If I was already struggling to make room for myself (and for the things I cared for outside of my daughter), there was no chance that I'd manage with two children in the equation, right?

This is where I was wrong, though. Having already experienced the intensity of having a new baby one time, I wasn't in for a shock when my second daughter, Elia, was born. I knew what it was like to try to function with little to no sleep. I knew how limited my free time would be, particularly in the beginning when I had to nurse every two hours or less. I had become an expert at quickly packing a baby bag for trips out. I had stopped feeling guilty when leaving Luna with babysitters in the aid of dedicating some time to myself, and I was prepared to maintain that same confidence in my decisions now.

Most importantly, however, I had acquired a kind of strength that comes with accepting that a perfect balance of "mother," "writer," and "human," was not possible — and that I did not have to berate myself for this. That I did not have to spend my time with my kid feeling crappy for not doing more as a professional, nor spend my time with a Word document feeling crappy for not doing things with my kid 24/7.

In a practical sense, a lot is undeniably harder now. My partner and I have to chase a toddler around all day after being kept up all night by a newborn. I sometimes have to nurse my seven-week-old while trying to spoon food into my 20-month-old's mouth. Both Luna and Elia need a lot, and much of our days goes to providing them with all they need: Clean clothes, baths, food, comfort, playtime, and so much more. Also, the double stroller is really damn heavy and a pain to fit into my car. Buying two sizes of diapers gets expensive.

The thing is, this time I know that I can do it. It won't always be perfect, or balanced. I won't always get it right. I won't meet every work goal, nor will I read a bedtime store every single night. Neither requires any guilt, though — and knowing this has made all the difference.