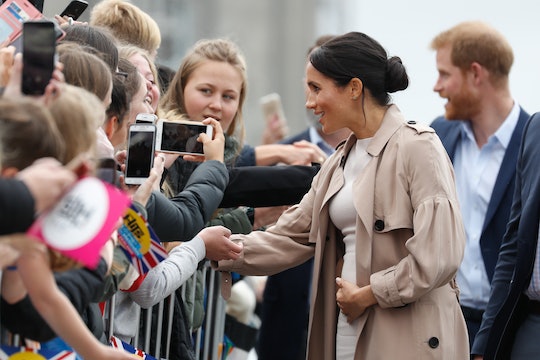 Once again, the haters are out in full swing when it comes to Meghan Markle, only this time it's about the way she touches her own body during her own pregnancy in public. You'd think she was doing something obscene in public, the way people are shaming her, but no, she's simply cradling her baby bump. The horror! Not only is this criticism downright mean, it's also inaccurate. Because as it turns out, the way Meghan Markle cradles her baby bump is one healthy pregnancy choice that even your non-royal self can make right now, for free.

That's right: Apparently, cradling your bump and touching your belly can be super beneficial for both you and baby, according to experts, and many moms (like Meghan) know this intuitively.

I remember when I was pregnant, I would constantly touch my bump, too. Partly because I couldn't believe it was finally there, and also because it made me feel closer to my baby. I wasn't sure if he could feel my hand or anything, but it made me feel better anyway. In fact, I still absentmindedly touch my now baby-free stomach when my son cries, even though he's been out of there for six months. I know I'm insane. Some habits die hard. But at least when I was pregnant (and now), I thankfully didn't have someone running around taking photos of me and having a billion people on social media follow my life and call me out for things that shouldn't be an issue. Seriously, the comments people have made are just over-the-top hateful:

"Disgusting and repelling?" Really?! How about good parenting? As Katherine Graves, founder of KG Hypnobirthing, explained to the Daily Mail, this kind of maternal touch is a great way for mom and baby to connect. "When mothers-to-be put their hands on their bumps in hypnobirthing classes, the 'baby responds every time,'" Graves said. (So I wasn't crazy and my son did feel my hand, and I comforted him in the womb.) Science has confirmed as much, too: Researchers from the University of Dundee in the United Kingdom found that "maternal touch of the abdomen" was even a more powerful stimulus than the sound of a mother's voice, "producing a range of fetal behavioral responses" including "arm, head, and mouth movements," according to Mother Nature Network.

Meghan has been reading up on hypnobirthing, which is the technique she plans to use when she gives birth to her baby in the spring. In the hypnobirthing classes Graves teaches, stroking the stomach is a relaxation method she tells her clients to practice.

"Touching her bump will help Meghan feel calm, releasing the so-called 'feel-good' hormone oxytocin, which goes directly to the placenta to positively affect her baby, and can even help stave off post-natal depression after the birth," said Graves. "A relaxed uterus gives baby the space to turn into the optimal position for birth and relaxed [moms] produce feel good hormone oxytocin, which goes direct to the baby via the placenta," she said.

As for all the negative backlash from people, it could also affect Meghan and her unborn baby, according to Graves. So y'all better follow the rule of "if you have nothing nice to say, don't say anything at all." "Any stress caused by criticism directed at mothers-to-be could cause the hormone cortisol to be released, with the potential for negative effects on an unborn child," Graves warned.

So if you want to do something healthy for your pregnancy right now, take a page from Meghan's book and touch and rub your bump frequently. Your baby will be relaxed, you'll be relaxed, you guys will bond, and you just might have a calm birth, which apparently leads to calm babies. You do you. And Meghan Markle should just keep doing her, too.