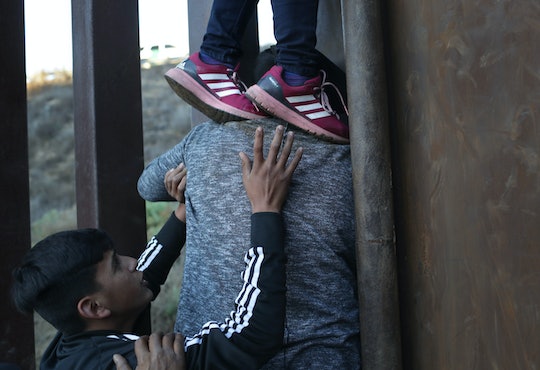 It has been over a full year since President Trump's administration adopted a "zero-tolerance" policy for illegal immigration at the U.S.-Mexico border. More than a year since families were torn apart from each other and forcibly detained, with children separated from their parents or guardians and the adults kept in federal jails and the children supervised by the U.S. Health and Human Services Department, but with no plan for reuniting them. It was monstrous... and it's not over. A recent investigation by The New York Times found that the youngest child separated at the border by the Trump administration was just four months old, and he has yet to be reunited with his family.

Caitlin Dickerson of The New York Times tracked a family that was separated at the border for The Weekly, a documentary series which focuses on intense investigations by journalists. Dickerson's recent segment profiled the family of Vasile and Florentina Mutu, a Romanian couple who fled their country in 2018 for Mexico in the hopes of traveling north to seek asylum in the United States. Vasile and Florentina entered the country at the U.S.-Mexico border with two of their five children. Sadly, the couple lost each other in Mexico and Vasile found himself entering the U.S. alone with the couple's 4-month-old baby boy, Constantin.

When U.S. border agents apprehended Vasile in Texas, his wife and 4-year-old son had already been deported back to Romania while he was sent to federal jail. Little baby Constantin was taken from his father, making him the youngest known child to be taken from his family because of the Trump administration's "zero tolerance" immigration policy at the U.S.-Mexico border. Vasile told The New York Times that he was pressured out of seeking asylum in the country due to a previous criminal record; he was eventually sent back to Romania.

Constantin was reportedly left behind in the care of a family in Connecticut for five long months.

Take a moment to think about the changes that happen to a little person between four and nine months old. Generally speaking, those five months will see your baby become more animated and aware of their surroundings. Sitting up, maybe moving around, crawling, saying a few words. Moments the Mutu family will never, ever get back, even after Constantin was reunited with his family in Romania five months later.

Eventually President Trump caved in to massive amounts of pressure, both nationally and internationally, and amended his zero-tolerance policy after images of children in these detention centers were exposed. He signed an executive order requiring families entering the country illegally must be detained together, as per Reuters, but unfortunately for many families it was too late.

Thousands of families have been reunited since Trump's executive order and the court order from Judge Dana Sabraw of the Southern District of California that followed. This court order found that families had to be reunited and that under most circumstances, parents found at the border could not be separated from their children, according to Vox.

Despite this, Vox reports that hundreds of families continue to be separated. Aunts and uncles and grandparents are removed from the children in their care at the border for apparent "law enforcement" purposes. In other words; Constantin might not be the last baby taken away from the people who love him most.

And it really has to stop.

You can catch The Weekly on Sunday night at 10 PM EAST on F/X and on Monday on Hulu.