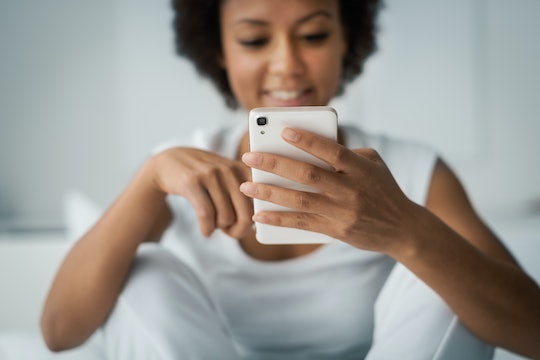 Period tracker apps are probably one of the best inventions of this century. Most of them get to be frighteningly accurate, so there's no more waking up to surprises or mad dashes to the bathroom during the middle of your day. And yet, it seems there may be another bonus: Early research also suggests that there are fewer unplanned pregnancies when using cycle tracker apps.

Not only do period tracker apps let you know when to expect your period itself, but many of them also track fertility cycles. Ovulation is the point when an egg is released from your ovary and you're most fertile around ovulation, as outlined by Healthline, so it's important to keep note of whether you're trying to become or avoid pregnancy.

For many people, ovulation can be difficult to keep track of. Although ovulation typically happens around day 14 of a 28-day menstrual cycle, not everyone has that textbook cycle, so the timing can vary. Plus let's face it, not all of us are trying to sit down and do the math to calculate how long our cycle is and when that window comes around.

Cue period tracker apps, which automatically use information from your cycle and its length to give you a potential fertility window. For many, it seems that that these apps not only help track your period, but also help reduce unplanned pregnancies.

Early data from a study conducted through Georgetown University Medical Center's Institute for Reproductive Health (IRH) and the University of Utah's OB&GYN department points towards the effectiveness of using period tracker apps to prevent pregnancies, as reported by Mobi Health News.

The study — published in the journal Contraception earlier this month — focused on the use of the Dynamic Optimal Timing (Dot) app, as noted by the study's abstract. Like most period tracker apps, DOT works by using period start dates inputted by the user to develop a personalized algorithm that predicts cycles and pregnancy chances each day, as noted by its website.

For the study, researcher's enrolled a total of 718 women between the ages of 18 to 39 years old, according to the study's abstract. Researchers reported that of the 629 women between the ages of 18 to 35, only 15 women became pregnant during the first six cycles, giving a 3.5 percent failure rate during typical use. However, the study's abstract noted those pregnancies were due to incorrect use.

Period tracker apps are new alternatives to family planning. For many women, they're easy to use and, since most apps (including Dot) are free, those with smartphone access don't have to dodge any other barriers. Aside from Dot, another app called Natural Cycles claims a success rate of 93 percent, according to Women's Health, which added that no period tracker can offer 100 protection against pregnancy.

Still, the study's principal investigator and director of the IRH, Victoria Jennings, told Mobi Health News that researchers hope this new study will "[contribute] to the ongoing discussion about the effectiveness of fertility apps and how their efficacy should be assessed."

The results are still preliminary, but right now they show a lot of promise, and highlight just how useful period tracker apps can be.