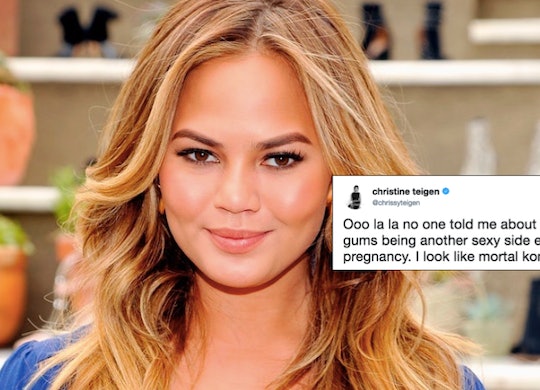 9 Times Chrissy Teigen Got *Brutally* Honest About Pregnancy On Twitter

It's been a week since Chrissy Teigen informed the world (and, specifically, her legions of dedicated social media followers) that she and husband John Legend are expecting baby number two! This is a big freakin' deal for the celebrity couple and their adorable 19-month-old daughter, Luna, obviously — but Teigen's fans know they're in for a treat, too. The supermodel and cookbook author is particularly celebrated for her honest-as-heck social media chops, and she kills it day after day on Twitter. Just like when she's antagonizing President Donald Trump or when she's sharing videos of her daily life, Chrissy Teigen's tweets about pregnancy notoriously go there. Sometimes, it seems as though there's no detail she won't share, no advice she won't ask for, and no whacky observation she won't report right back to the Twitterverse.

In fact, Teigen announced that she is expecting last week with an adorable Instagram video of little Luna herself patting her mom's belly and saying "baby." She linked to the sweet video (with the very Chrissy Teigen caption of "it's john's!") in a tweet, too — and there are plenty more pregnancy tweets where that came from. As Teigen and Legend prepare for their second child, who will likely be a boy, let's take a look back at the gems she tweeted about her first pregnancy as well as what's been going on the second time around.

When The Medical Form Got A Little Weird

Like any diligent mom-to-be, Teigen is obviously heading to the doctor for her checkups. And one question on a form she had to fill out literally made her go "uhhh" on Twitter. Always connected with her followers, Teigen took a pic of the form and starred the questionable question: "Are you and your partner related to each other — other than by marriage?"

When She Needed Answers About Her Pregnancy

Just days after announcing that she has another baby on the way, she turned to her followers for some answers about the way her body is changing this time around. Specifically, she wanted to know whether it's "normal to get bigger, faster with second baby." It turns out that this is totally normal, according to Parents magazine, because a woman's uterus does not return to its pre-pregnancy size after they've given birth. That means that subsequent babies will literally grow more quickly.

Tons of other moms have probably wondered the same thing, so kudos to Chrissy for helping them get to the bottom of this, too.

When She Got Honest About Those Weird Changes

Before ever getting pregnant, who would ever think that this could be a side effect? "Ooo la la no one told me about bleeding gums being another sexy side effect of pregnancy. I look like mortal kombat," Teigen shared in December 2015.

And bloody gums during pregnancy is very common. According to BabyCenter, about half of pregnant women experience this and "pregnancy gingivitis" partly happens because of "hormonal changes that make your gums more sensitive to the bacteria in plaque." Still, it's one of those weird changes.

When She Was SO Excited

When Teigen was pregnant with Luna a couple of years ago — the result of the grueling IVF process — she was psyched about it. Actually, she was so excited, she tweeted at the time, that she "could barf 4-5 times a day." Who doesn't love a not-so-subtle shoutout to morning sickness?

When She Really Wanted To Have A Word With Little Luna

In October before Luna was born, Teigen got real about what a growing baby does to its expectant mama. "This tiny baby is an immune system thief and i can't wait to tell it the second it comes out. We have a lot to discuss, actually," she wrote.

Thank heavens Teigen said it, because a woman’s immune system does change throughout a normal pregnancy in "a highly orchestrated manner," according to researchers at Stanford.

When She Was Hungry

Teigen learned early on that, when she wasn't barfing, she'd probably want to be eating pizza. "I have come to realize that at some point in the day, I will order and consume a pizza so it might as well be in the morning," she tweeted. She didn't actually mention the pregnancy in the tweet, though. Maybe this is just how she always feels. #relatable.

Really, The Cravings Will Get Ya

Months before she delivered Luna, Teigen shared how she was spending her sleepless pregnant nights. "4:30am, eating a sausage mcmuffin and looking up the gestation period of animals," she tweeted.

When She Loved Being Pregnant

On Dec. 5, 2015, Teigen tweeted that she loved feeling the baby — presumably kicking inside of her. But she realize pretty quickly that may not have come out exactly the way she wanted it to. "that is very creepy written out, on it's own," she wrote in a follow-up.

When She Was Tired Of The B.S.

This tweet speaks for itself. Admit it, you've thought this, too.