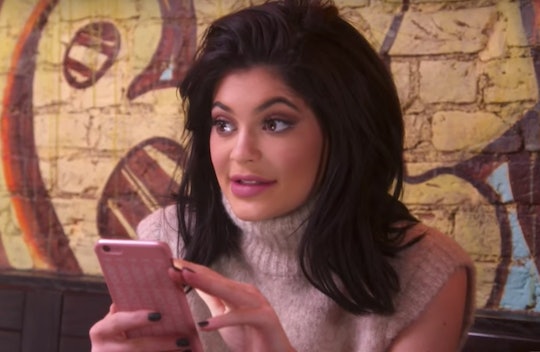 These "Clues" From Kylie Jenner's Snapchat Prove She's *Not* Pregnant

It has been months without any word of confirmation about whether Khloé Kardashian and Kylie Jenner are actually pregnant, as rumored. However, after some investigating, there are a few "clues" from Kylie Jenner's Snapchat that seem to prove that she's not pregnant. And honestly, it's totally messing with us because this scenario is very likely, actually.

According to various reports that surfaced in late September, Kylie is allegedly six or seven months pregnant by now, reportedly with a baby girl. Her family has been careful to not talk about the state of Kylie's — or sister Khloé's — uterus in public and the family's show, Keeping Up With The Kardashians, has also been mysteriously Kylie free this season.

Some fans might believe that that's because they're hiding her bump, but it's also been very normal for the youngest sister to be absent from filming with her family in past seasons, especially when she has crazy product launches or other things going on. Which, this spring and summer when they filmed this season, she did. In a preview for the KUWTK mid-season finale this weekend, fans think that there's a teaser for a party in which Khloé announces her rumored pregnancy with boyfriend Tristan Thompson, and Kylie doesn't seem to be there.

Of course, the Kardashians will reveal the truth when they darn well please. But maybe just one of the sisters is pregnant (not including Kim's surrogate). And there are clues on Snapchat that might prove it, if only because fans know she loves trolling them so much.

The Buns In The Oven

A lot of people assumed that this Snapchat of three buns was meant to represent her, Khloé, and Kim all being pregnant together. But it could just as well be yet another example of how Kylie loves to Snapchat her cooking endeavors, like when she posted herself making lasagna or soul food on two separate occasions. So are these buns really that out of the ordinary?

On Snapchat, she posted a picture of what was obviously an amazing junk food haul. But if you look in the very, very back of the picture, there's a box of tampons there! While it's true that a pregnant woman might need tampons or that they could have been for any one of the hordes of female glam team members or assistants, it could be more likely that she just forgot she was supposed to hide them from her fans.

In early October, she posted herself singing along to a song called "Nothing's Gonna Hurt You Baby" by the band Cigarettes and Sex. One of the lyrics is "nothing's going to hurt you baby," which she drew attention to by adding it to the video. It's smart to remember that this was just two weeks after the rumors hit and people were going crazy, guessing if they were true or not. The Kardashians and Jenners know what's good for business — the more you wait and the more you tease, the more drama ensues.

Of course, everyone shows differently, so it's entirely possible for someone to be five or six months along, when this Snapchat was allegedly taken, and not have a noticeable pregnancy bump. Kylie's fans weren't buying it, though. Also, her lip fillers are still looking good, which some suggest is another sign that she's not pregnant.

The Kardashian and Jenner sisters are super thoughtful, and when sisters Kourtney and Kim were pregnant, they did everything they could on their show to treat their sisters like royalty during those nine months.

Khloé gave Kylie a "baby girl" necklace for her birthday in August, which is her nickname for her. Kylie Snapchatted it, and Khloé mentioned it in the video they did together for Kylie Cosmetics earlier this fall. As thoughtful as Khloé is, you'd think she would have gone for a mom-theme for the birthday gift or something to commemorate their shared pregnancy, right?

As fans know, the KarJenner sisters love to play pranks on each other and this time, it feels like the joke's on us. Someone is likely pregnant in the family, but it's likely not Kylie judging from these clues.