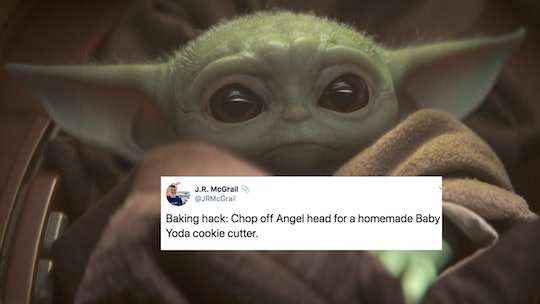 You already know you love Baby Yoda. Even if you aren't a huge fan of the Star Wars universe, the love of the new star from The Mandalorian on Disney+ is simply a universal truth. And of course you know how people celebrate the things we love during the holidays: we bake cookies. It is a beautiful tradition and to combine these two loves, the internet has discovered a very clever hack to make Baby Yoda-inspired cookies that's so simple and brilliant, you're going to be amazed you didn't think of it yourself

On Dec. 15, Twitter user J.R. McGrail helped the hack for baking Baby Yoda cookies go viral when he shared images, which were first posted on Imgur user Geogal42, with his followers. As McGrail tweeted, if you happen to have a cookie cutter in the shape of an angel hanging around your house, simply (and I know this is going to sound vaguely gruesome) chop the head off the angel. According to McGrail, this will give you a perfect homemade Baby Yoda cookie shape because the wings form his little green head.

I'm fairly certain the marketing geniuses at Disney are going to be slightly disappointed that someone came up with such an easy and free Baby Yoda cookie cutter, but here is what it looks like for those of you who would like to reap the benefits.

Baby Yoda cookies might not seem like the sort of seasonal treat that would go over well at parties this holiday season, but I think it's safe to say they'll be pretty popular. After all, the fictional tot from The Mandalorian ended up beating out real human babies like Meghan Markle's son Archie and Kim Kardashian West's son Psalm as most Googled baby of 2019. It's important to note that Baby Yoda also beat out the ear worm of the decade "Baby Shark," and that's really saying something.

As far as Baby Yoda cookies go, this baking hack looks like it might genuinely work. After it was shared on social media, several people admitted they had used the trick and it worked perfectly for them.

Now that the first season of The Mandalorian is set to wrap up with a two-part finale, fans are going to have to say goodbye to Baby Yoda and his adorable antics for the foreseeable future.

But at least now we know we can bake cookies that look like him. And then eat them. It's a perfect solution.