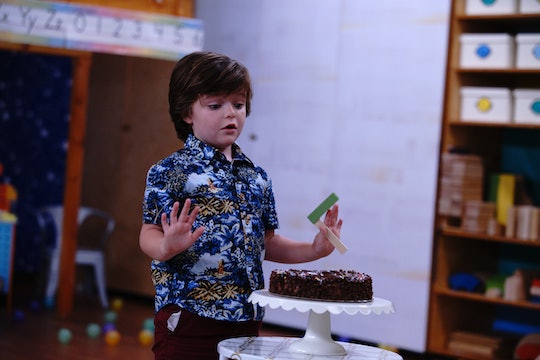 Do you ever wonder what your kids do when you're not around? It turns out, you might just be able to find out the answer, thanks to this exclusive clip from The Secret Life Of Kids, a new show premiering on March 16 on USA. The show is a "comedic social experiment" in which a group of real 5-year-olds play in a daycare center, with tons of hidden cameras. The kids are monitored by experts who set up different situations for the little ones to navigate and comment on the children's behavior.

Like, in one scene from the teaser clip, they leave a chocolate cake with sprinkles out in in the yard and tell the kids to not touch it. Of course, they catch one precocious little boy sticking his fingers right in it, but when they ask the group later if anyone touched the cake, he's the first one to deny it. Until another little girl throws him under the bus and calls him a liar. (They really are adorable little troublemakers, aren't they?)

One of the behind-the-scenes experts explains, "Parents worry about lying. But actually it's very cognitively sophisticated." Which is precisely the reason most parents worry about it, right? Sometimes these toddlers are way too smart for their own good. The unscripted USA show will be made up of six episodes total in which the children "approach topics such as love, hate, relationships and lying, all caught on hidden cameras," according to the network press release, so expect a lot more "caught red handed" moments.

If the format of the show sounds familiar, you're spot on. If you've ever been to the U.K. or seen some of the viral clips (like this one of Skylar, who struggles with giving her friends some of her chocolate from last year), you'll recognize that USA's Secret Life Of Kids is based on the format of BBC's The Secret Life Of 4 Year Olds. The American version is basically the same thing, just without the accents.

The U.K. version is critically acclaimed and widely popular for obvious reasons. As much as they might make us cranky sometimes, kids are pretty cute and get into some ridiculous situations. Watching them get out of those sticky situations is what makes the format so successful with fans. Judging by the clip, this motley crew of 5-year-olds are already navigating romantic relationships, friendship, and every day drama. ("I want a divorce," the kid who stole the cake says about his "wife," while shamelessly picking his nose.)

Although most of the show is laugh-out-loud adorable, sometimes it's absolutely heartbreaking. One child has to be comforted by one of the experts after he breaks into tears when the others won't let him join in their games. "I want to play, they won't let me play," he tells her. Later, in a one on one interview with the producers, the kid adds that it's hard to be him, while sniffling through his tears. It will break your heart every time you watch it.

As any parent of a 4 or 5 year old knows, it's a new and exciting time for kids at that age. They may still be children, but they can also string together some hilarious sentiments and are definitely trying on some grown-up behaviors, as evidenced by the one girl putting on her eyeliner and lipstick "just like my mom," the kids mimicking taking care of a baby together, or examining why it's not a good idea to lie.

Suffice to say, this series is definitely something every parent is going to want to watch. Because who doesn't secretly want to know what their kids get up to when they think mom and dad's prying eyes are no longer on them?

More Like This
Jinger Duggar Was Taught Motherhood Defined Her — & Then She Broke Free
Watch An Exclusive Sneak Peek At 'The Amazing Maurice'
When Does 'Yellowstone' Season 5 Come To Peacock? Not Soon Enough
10 Parenting Lessons We Learned From Red & Kitty In 'That '70s Show'
What Parents Are Talking About — Delivered Straight To Your Inbox