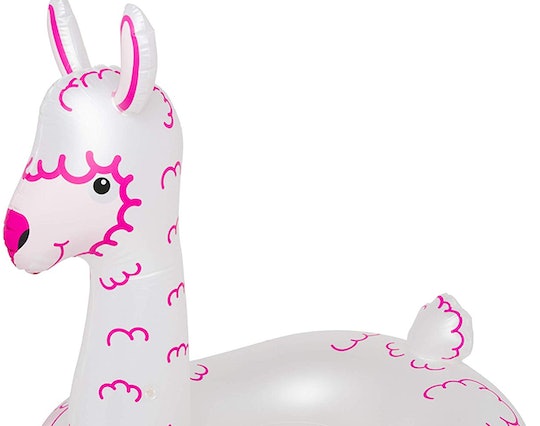 I don't know when the llama craze began, but I know that just two years ago, my daughter chose rainbow llama-printed sheets and we were immediately part of a ~trend~. I don't know if unicorns can ever be replaced, but they're having to split some of their fame with the llamas of the world now. Whether it's decor, toys, or clothing, llamas have made their presence known — and now they're in your pools. Last year, we had a narwhal, pizza, and a unicorn float for our summer days. This year, we're going for a llama float. Once you see it, you're going to want one, too.

From Big Mouth Inc. — the makers of the infamous unicorn sprinkler and the now-viral corgi pool float — comes a brand new float to make your Instagram feed perfect for the summer. #Blessed. The llama float takes on the newest animal trend in a 4-foot raft. At 4 feet by 4 feet, this float is *huge* and can hold up to 200 pounds thanks to its heavy PVC material. It's perfect for lounging in, floating, and for pushing across your neighborhood pool while yelling, "Tina, come and eat your ham!" I mean — obviously you have to name this llama float Tina, right? (If you have no idea what I'm talking about, be a dear and watch Napoleon Dynamite. It'll all make sense.)

Just look at that beauty. She's perfect. Without any actual way to make fur, the float sports some cute graphics to give her four legs tucked under her pink, graphic fluff. And that neck! Heart-eyes for a long llama neck, obviously. Perfect for holding onto as you float the summer away.

Plus she's cute as a button, and just $25 on Amazon. Honestly, my 4-year-old and I will probably be in a major tussle over who gets to ride the llama first.

I personally have several Big Mouth, Inc. floats and can guarantee that they're easy to deflate, easy to store, and easy to pump back up. We have an electric air pump for when we need to blow our floats (and giant unicorn sprinkler) up in the backyard, but if you're driving to a pool, do yourself a favor — get an air pump with a car adapter. It's so much easier to tote a deflated float to your neighborhood pool and pump it in the parking lot than it is to try and either walk with a giant, inflatable llama over your shoulder or trying to squeeze it into your hatchback. (On second thought, this would make for great Instagram Story fodder, so you do you.)

But no matter how you pump it, you can't go wrong with a llama float. I don't know what's next in the world of llamas, but more giant inflatables please. This one also has a bit of a sheen to the outside of it, which means not only are you riding a giant llama in your pool, but you're also riding a giant sparkling, shiny llama in your pool. #BestSummerEver.