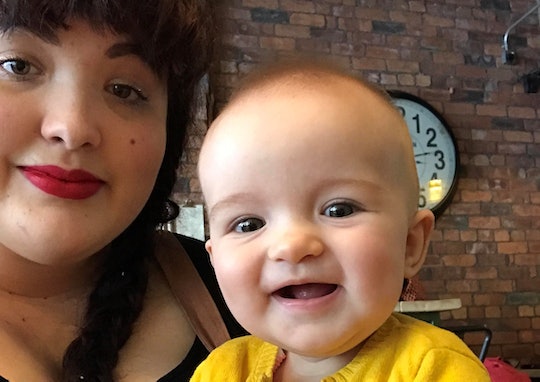 As someone who has long struggled with anxiety, I've second guessed basically every decision I've made since having my daughter, Luna, seven months ago. I've wondered whether watching Outlander or Game Of Thrones in front of her makes me a crummy, selfish parent. I've questioned whether dressing her in an assortment of boys, girls, and unisex clothing is an OK choice. I worry that I'm disrupting her digestive system by letting her devour a whole packet of Ella's Kitchen in one go. So I did not expect for the first time I felt like a competent mom since having her to be on a transatlantic flight.

In the weeks leading up to Aviation Hell Day, I convinced myself that Luna and I were about to embark upon the worst seven hours of both our lives. I was flying with my baby for the first time, so of course there were a number of worst case scenarios circulating in my mind.What if she spends the entire seven hours crying? What if there's absolutely nothing I can do to calm her down? What if we get really aggressive and rude neighbors? What if the pain in her ears is traumatic, leading her to resent and loathe me forever?

We were going to be making the journey from England to New York entirely on our own. Her dad wouldn't be around to sing her to sleep. He wouldn't be there to help quell my fears, either. We were doing this thing solo, and I was absolutely petrified.

As soon as I booked our tickets to visit family in the States, I started picking up as many tips as I could for flying with an infant. I learned that nursing or bottle feeding them at takeoff and landing is highly recommended. The swallowing apparently helps prevent pressure and pain. I booked an aisle seat in case I needed to get up and bounce her around or give her something new to look at. I packed as lightly as possible, opting to wear her on my chest instead of having to navigate a stroller, suitcase, backpack, and purse.

Still, paranoia consumed me. Luna was just so small. She didn't yet have the capacity for language. I wouldn't be able to explain what was happening or who all these people were or why we were in a giant machine in the sky. I wouldn't be able to promise her that her ears wouldn't hurt forever should they start to cause her discomfort.

Truthfully, I didn't think I'd be able to offer her any kind of comfort whatsoever. Until this point, her father had always been the designated baby calmer. I don't know if it's his voice, his singing, his facial hair, or his naturally warm disposition, but something about him has always helped soothe our kid. My personality, on the other hand, is nervous and jittery. My voice stumbles often and I cannot remember the last time I would've characterized my mood as "relaxed."

But for the most part, Luna is a pretty chilled out baby. If she's not teething or ill, she almost never cries. She's also obsessed with other people. Give her a new person to look at and analyze, and she'll be entertained for hours. Heck, give her anything new to look at (a toy, a book, a hair scrunchie, or a bit of lettuce) and she'll be entertained for hours. I knew, rationally, that she'd probably be OK on the plane so long as her ears didn't hurt. Anxiety, however, is never rational. My concerns about being a sh*tty mom are never rational, either.

What if she screams so intensely that people think I'm hurting her? What if they get angry? What if they accuse me of being a bad mom for flying with a baby in the first place?

When it actually came time to fly, I made sure that I had enough milk pumped to feed her at takeoff. I would pump more on the flight for landing. I packed enough toys to entertain her throughout the flight should watching our fellow passengers cease to be satisfying. I wore breastfeeding-friendly clothes and I travelled light for the first time in my life.

Still, the questions plagued me. What if she screams so intensely that people think I'm hurting her? What if they get angry? What if they accuse me of being a bad mom for flying with a baby in the first place? What if she sh*ts through her clothes when the seat-belt sign is on and we aren't allowed to move? What if my ears burst after listening to her wail for half a dozen hours?

She was happy with me. She was comfortable. Maybe I wasn't second favorite, after all. Maybe she actually liked me.

My anxieties remained until, suddenly, we were airborne. "It's now safe to move around the cabin," the pilot announced through the speakers. Almost on cue, Luna finished her bottle. She was OK. Maybe this would be OK.

For the most part, it was. Luna did cry a few times (once because she was hungry, once because she was tired), but what I found was that rearranging her position and cuddling her closely was always enough to soothe her. Cooing in her ear, singing gentle tunes, and offering my breasts helped, too. She was happy with me. She was comfortable. Maybe I wasn't second favorite, after all. Maybe she actually liked me.

When I think about my anxieties pre-flight, I realize that a large part of them were rooted in the fear of other people. I didn't want to disrupt their otherwise peaceful journey. What I really should've remembered is that Luna and I deserved to be on that plane just as much as anyone else. And, you know, she's a baby. Babies cry. People should know this. If they don't (or if they have that much of a problem with a distressed infant), chances are they're the asshole. Not us.

When you live in a near-constant state of self-criticism, it becomes all too easy to question your abilities as a parent. You begin to wonder what it is that you can actually offer a child.

That said, the bulk of my anxieties were rooted in not being able to comfort my daughter. When you live in a near-constant state of self-criticism, it becomes all too easy to question your abilities as a parent. You begin to wonder what it is that you can actually offer a child. You begin to feel guilty that this tiny creature has ended up with such a mess of a parent. Sometimes all that tiny creature needs is a cuddle from mom, though. When I flew with Luna for the first time, I realized that she is perhaps beginning to conceptualize the love and care that I have for her. And that, perhaps, that love and care have made me competent all along.

More Like This
41 Strong & Sweet Baby Boy Names That Start With “K”
20 Stocking Stuffers For Kids Under $20
The “Tripledemic” Is Scary, But I Feel Less Helpless When I Wear A Mask
Festive Mommy & Me Holiday Nail Ideas To Try