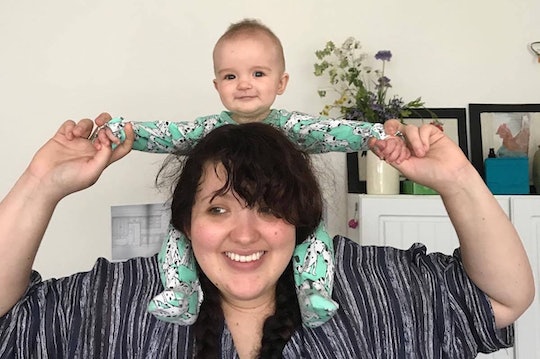 I didn't plan on having a baby when I did. While I hoped it would happen someday, I assumed it would be in my mid-to-late 30s. By then, I'd be more established and settled into my career. I would've outgrown partying. I would have more financial security.

When I found out I was expecting at 25, one of the first things I did was look at my bank account. I seemed to have a few cents saved, although I wasn't sure where they'd come from. My checking account hovered around $42. I guess this is why the most important parenting advice I'd get would turn out to be about money.

A few weeks after my partner and I decided that we would take the plunge and become parents, I found myself at my niece's baptism. My brother and sister-in-law were having post-church drinks and food at their house, where I ended up chatting with her mom. Although we'd spoken several times in the past, at a myriad similar family functions surrounded by trays of home-cooked penne a la vodka and red solo cups, this was the first time we talked about something that felt more serious.

She congratulated me on my news, and for whatever reason I felt compelled to express my concerns — particularly the financial ones. How could we raise a baby when we were living paycheck to paycheck? I didn't make enough to save. My partner didn't, either. We had credit card debt. So much credit card debt. I had medical bills, too. I didn't know whether I'd be able to afford the oil change my car needed that week, let alone a crib or baby clothes or diapers or one of those tubes that helps you suck your infant's boogers out of their nose.

That's when she said it. "Honestly, you never have enough money, but you make it work anyway."

It was a simple enough idea, but one that stuck with me. She told me that, sometimes, there probably wouldn't be enough to pay some of the bills. "If you don't cover your credit card one month, or you skip on the electric, it doesn't matter. You'll try to pay it the next month." Good credit wasn't necessarily essential to being a good parent.

This was a woman who had raised three daughters herself, frequently feeling broke and concerned about how she and her husband would afford the next big bill over the decades. Sometimes they found a way, sometimes they didn't. Looking at her three daughters that afternoon, however, I felt a sense of calmness. They were all strong women. They all loved their parents. They even seemed to like their parents. She and her husband had clearly done a good job with them, even if they couldn't always buy them all the things growing girls might want.

I feel it's important to note that my partner and I weren't, and still aren't, by any means destitute. I know that there's a big difference between being broke and being poor, and we are lucky in that — if ever we sincerely need financial help — there will likely be a relative willing to contribute. This is an immense privilege and I'm grateful for it.

Even if there isn't enough cash left to spare, it's a comfort to know that you can still make parenthood work.

Still, it's easy to worry about money when you don't have all that much to spare. Our daughter is 8 months old now, and both her father and I work constantly. We are self-employed. Like so many of our fellow millennials, neither of us have pensions or a retirement plan. After all of the monthly essentials get paid (rent, electricity, water, heating, childcare, credit cards, fuel, and groceries included), we never seem to have more than $100 in any one bank account. It's those $100 that get us the diapers, though. They help us purchase our kid's baby food. They've helped us buy her clothes and diaper rash cream and stuffed toys and foam blocks. Even if there isn't enough cash left to spare, it's a comfort to know that you can still make parenthood work when you're living paycheck to paycheck.

Thankfully, we've also had help with a lot of the big stuff (the crib, the changing table, the stroller). As it turns out, a lot of people love buying sh*t for babies. We've also purchased quite a few things second-hand, which is cheaper and arguably more rewarding than shopping new. Finding gems amidst old, discarded things is like an adventure. Our daughter may not have an entire playroom to herself, but we've come to realize that she doesn't really need one. In fact, babies don't actually need for all that much. Babies who breastfeed arguably need even less.

I'm trying not to spend our time together now worrying. Our daughter is only going to be this precious age for a while, and it would be an immense shame to miss that.

I don't know what will happen then, but I'm trying not to spend our time together now worrying. Our daughter is only going to be this precious age for a while, and it would be an immense shame to miss that. I don't know if she'll ever love us this unconditionally again. I don't know if just the sight of our faces will be enough to sooth her when she wakes up lonely or afraid in the middle of the night.

There's a lot that I don't know, among it all the answer to how we'll ever have enough money. We've been managing for eight months so far, though. We've been managing even though, just a year ago, we couldn't have fathomed being able to do so. We're just making it work, as so many other parents seem to find a way to do so. Some days are harder than others. Some bills are bigger and scarier than the ones before them. Our daughter, however, is always loved and looked after.

We may not have savings or a plan for how to fund her time at university, but we're doing OK. Maybe that means we'll do OK in another five, 10, or 15 years, too. We'll make it work, even if there's never more than a few bucks to spare at the end of the month.