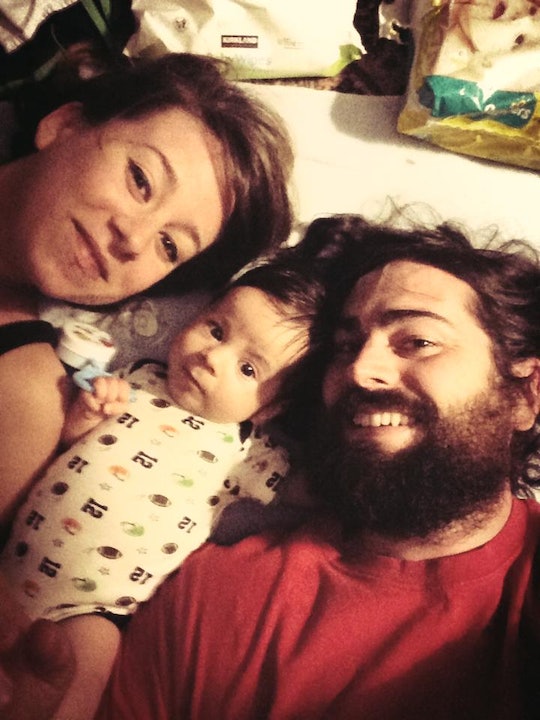 When women get pregnant, our culture feels emboldened to comment on their bodies. When I was pregnant, I prepared myself for this, and I felt like I was ready to weather the barrage of comments and questions I was sure to face, particularly when it came to losing the baby weight. What I couldn't have possibly prepared myself for, however, were the comments surrounding my relationship post-baby. People felt entitled to tell me that the moment the baby arrived, I'd never have sex ever again.

While these remarks are common, this joke we make about postpartum relationships is actually really screwed up. Because when you're still healing from the trauma of labor and delivery, breastfeeding at all hours of the day and night, and sleeping a grand total of five hours every three days, the last thing you want to hear is that your sex life is dead, too. It's not funny to tell new parents that their orgasms are a thing of the past, especially when they're already dealing with the immense changes that come with new parenthood.

It's true that it's common for couples' relationships to change after they have kids, sometimes for the worse. In a study published in the Journal of Personality and Social Psychology in March 2009, researchers found that the "rate of the decline in relationship satisfaction is nearly twice as steep for couples who have children than for childless couples." And most studies indicate that many couples' sex lives take a hit shortly after the baby is born.

Even if the "no sex after baby" stereotype has some truth to it, and new parents are having less sex (or none at all), instead of poking fun at them, we, as a society, should be taking the time to figure out why.

This is usually, but not always, framed as the woman's "fault." If you've ever seen a movie where the sexually frustrated husband tries to put the moves on his wife, only to be rejected, you know what I mean. While moms' lack of interest in sex is usually framed as a result of them becoming overly preoccupied with the kids (and in fact, in a Babble survey 75% of women said they loved their kids more than their husbands), no one stops to consider the sociocultural factors that might be at play here. Women are more likely to carry the majority of the childrearing responsibilities, in addition to their work, social, and romantic life obligations. A 2003 study by the Pew Research Center found that women still bear a heavier load than men when balancing work and family. So it's no surprise that they might be less interested in sex than their husbands are — they're a lot busier and more stressed out than their partners are.

Even if the "no sex after baby" stereotype has some truth to it, and new parents are having less sex (or none at all), instead of poking fun at them, we, as a society, should be taking the time to figure out why. Why do many couples have less sex after having kids? Is it because women automatically become asexual beings as soon as they pop out a kid? Or is it because the social expectations placed on the shoulders of new mothers are so exhausting, so relentless, and so cruel that in order to be considered "good mothers" they must devote their entire existence to motherhood, and little else?

As I breastfed, changed, bathed, co-slept, and spent every hour of every day with my newborn son, I felt the unbelievable pressure of having to maintain my career while simultaneously investing time and energy in my romantic relationship. I was fortunate enough to be able to work from home, but I didn't have the luxury of maternity leave, so I was working the day after I brought my son home from the hospital. I was bombarded by all the things I "had to do," and I also felt tremendous pressure to lose the baby weight and keep my partner satisfied — emotionally, intellectually, and sexually.

I felt as though I was failing as a mother and as a partner.

Before I knew it, I was touched out and suffering from postpartum depression. I would cringe at my partner's slightest touch, because after hours of exclusively breastfeeding and being hooked up to a breast pump and being skin-to-skin with a newborn, I didn't want another human being to touch me ever again. I tried to ignore the fact that his eyes fell to the floor every time I shrank away from him, or the disappointed tone of his voice when he said he understood that I just didn't want to have sex — even after I was given the clear from my OB-GYN after that six-week postpartum visit. But his frustration was palpable.

It didn't help that my friends and family members would joke about how we'd "never have sex again," or that they hoped I "enjoyed those orgasms while they lasted." On the list of things I was "supposed to do" as a new working mom — lose the weight and take care of my baby, all while maintaining a successful career — sex felt like just one more item on the list. I felt as though I was failing as a mother and as a partner, because in order to maintain my worthiness I must continue to have an appropriate amount of sex with my partner, because that's what women do, right?

When I look at pictures of my postpartum self, holding my newborn with my partner close by, the forced smile on my face looks painful. I know that the pressure to "do it all" (up to and including doing it) played a factor in my developing postpartum depression. I was hellbent on making sure that the naysayers believed my relationship was jut as happy and sexually fulfilling as it was before my son entered the world, even though of course it wasn't. The truth was that my partner and I weren't having sex and I didn't want him to touch me and I was extremely overwhelmed and exhausted all the time, so sex was the furthest thing from my mind.

Maybe if I had heard words of encouragement instead of jokes about my non-existent orgasms, I would have felt more like myself and less like a spit-up covered, sleep-deprived shell of the sex-loving woman I used to be.

Instead of hearing that I was falling into some postpartum relationship stereotype, I needed to hear that it was OK to focus on myself and what I needed. Instead of feeling obligated to have sex to ensure the longevity of my relationship, I should have felt supported in living as an asexual being for as long as I deemed it necessary. Maybe if I had heard words of encouragement instead of jokes about my non-existent orgasms, I would have felt more like myself and less like a spit-up covered, sleep-deprived shell of the sex-loving woman I used to be.

Joking about how little sex a couple will have after having a baby isn't just lazy and unfunny. In the vulnerable postpartum period, it can make new parents feel as though they're failing at yet another aspect of their tumultuous new lives. Because even if the lack of sex during the postpartum period is a real thing, there's certainly no reason for anyone to continue commenting on it. Postpartum women don't need the pressure of "getting their sex lives back" anymore than they need the pressure of "getting their bodies back." New moms just need to take time and be patient with themselves, and their libidos will eventually return. Because just like their bodies, their sex lives aren't lost forever.