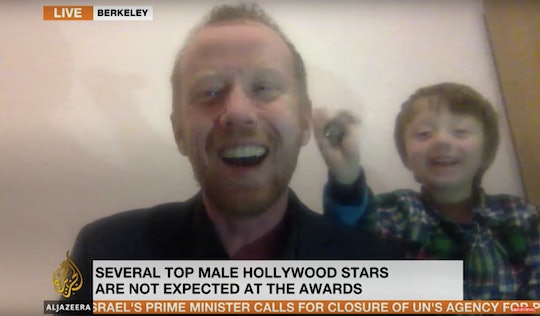 It's not easy working from home, as so many parents know all too well. Luckily, most people totally understand that kids don't really care about your conference call or your expert opinion, as this viral video of a 5-year-old kid crashing his dad's live TV interview shows. On Monday morning Daniel Smith-Rowsey, a film historian at St. Mary's College of California, was offering up some analysis on the Golden Globes to Al-Jazeera host Sohail Rahman. As Smith-Rowsey tried to talk about the awards show, his son Rainier slowly makes his way into the room.

You have to hand it to the kid, as he was a little more subtle than the little girl who "hopped" into her dad's office and crashed a BBC interview last year. Well, for a little bit at least. As Rainier, called Razor by his dad, makes his way into the Skype shot and cozies up to his dad, he waves into the camera. "Um," the visibly embarrassed dad said, "that's my child, excuse me."

Rahman wasn't about to let it hold up the interview, according to the video from Al-Jazeera. "That's no problem, Daniel, he can come, too." Despite his father gently pushing him aside a few times, Rainier continues to try to scope out the scene on Skype, all while rolling a toy truck up and down his dad's arm, before finally retreating to the back of the room, using the wall as a better race track.

Smith-Rowsey manages to keep his train of thought and complete the interview, as Rainier turns around and waves every now and again, before joining his dad in signing off. Rainier even jumped in at the end to voice his optimism that Hollywood (and other industries) would start taking more aggressive steps towards ending sexism and sexual misconduct.

It's sadly very relatable. Whether it's a toddler, a pet, or a roommate yelling from the other room, it's hard to keep a professional "look" when you work from a home office.

Al-Jazeera English jumped on the video, tweeting out the edited version of the interview you see above with the caption, "We just had a BBC moment on live TV." After that, the video went viral. It was a very welcome break in the ever depressing news cycle. Maybe Rainier and Marion Kelly, the BBC kid should get their own show, because I could literally watch both of them all day long.

Robert Kelly, or the BBC Dad, was criticized by some when his video went viral for not picking up his kids and waiting for his wife to come in and get them out of his way. There were even parodies about how a mom would have handled it "better" than any other dad. But there isn't a "right" way to handle that situation — you can't nudge your kid off of you or yell at them to go back to their playroom on live TV and not get criticized for looking like a terrible parent. FWIW, Rainier was supposed to be locked out, according to his dad. Smith-Rowsey told TODAY:

I saw him coming in and cursed myself for not locking the door. Razor and I had never discussed protocol about this, so I hoped against hope that he would sense that he shouldn’t be on camera.

Once he realized there was no chance of that ever happening, he added in the same interview with TODAY, "At that point I just tried to make the best of what seemed to me a very embarrassing situation. I tried to focus on the questions. I hope I didn’t fall too flat on my face."

Everyone Seemed To Love It

That Smith-Rowsey was embarrassed was all too relatable, but it was good that the network and the general public cheered the mishap rather than criticizing it. Here's to all the work-from-home parents out there on video conference calls just trying to make it through the workday. They might be embarrassed, but the world could use more cute kids on TV.