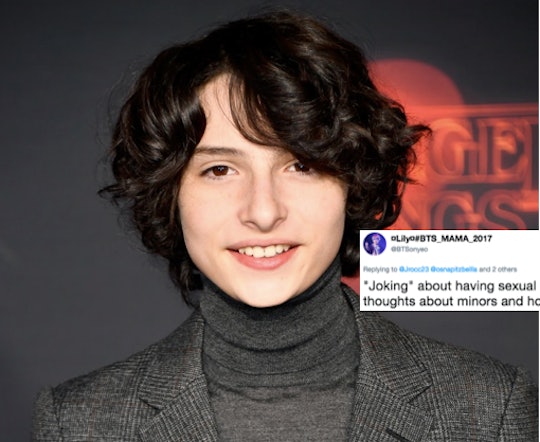 In the wake of sexual assault and harassment allegations made against Hollywood mainstays such as Harvey Weinstein, Brett Ratner, Kevin Spacey, among others, there's been a lot of conversation about how our culture objectifies and sexualizes young women and men. Which is likely why 27-year-old model Ali Michael's joke about wanting to date Finn Wolfhard, the 14-year-old Stranger Things cast member, just sounded totally tone deaf and wrong to so many people. Romper's request for comment made through Michael's agency was not immediately returned.

Earlier this week, Michael tagged Wolfhard in an Instagram story and wrote, “Not to be weird but hit me up in 4 years," according to The Independent. Given their age difference, people were reasonably upset with the model for sexualizing a minor and employing a double standard. As one Twitter user put it, "And if the roles were reversed and a 27y/o man said this about a 14 y/o people would be dragging him, but since she's a girl it's ok? wtf."

But not everyone saw the problem. One user tweeted, "There are more significant sexual assault issues to focus on right now. Guys are sending d*ckpics to girls every day. She made a joke."

Michael's comment appeared all the more inappropriate given that Wolfhard left his agent earlier this month after sexual assault allegations against him surfaced.

Michael issued a public apology via text video on Instagram Stories and gave a statement to Teen Vogue, acknowledging her wrongdoing. She told Teen Vogue on Wednesday:

It was never my intention (nor has it ever been) to sexualize a minor in any way shape or form. To those I offended or misled, I apologize for a post made in haste and lacking in sensitivity, particularly considering the landscape of the present culture.

Michael's statement to Teen Vogue emphasized that she was only joking. She wrote that she often jokes about dating fictional characters and once asked Simba from the Lion King and Edward Scissorhands to give her a ring. Michael implied that she only meant that Wolfhard's character call her in "4 years," when he was a consenting adult.

The problem with that apology is that Wolfhard isn't an animated lion voiced by Jonathan Taylor Thomas. He's a 14-year-old teenage boy. Sexual harassment and abuse go both ways, and it's very likely that if a 27-year-old male model said the same thing about Wolfhard's female co-star, 13-year-old Millie Bobbie Brown, the reactions would have been deemed creepy AF — hands down.

Many Were Quick To Point Out The Double Standard

Others Just Didn't See What The Big Deal Was

Sexualizing a minor is never OK and it sounds like Michael really didn't see the harm in her comment. Yes, she said "in four years," but that doesn't change anything. Although she allegedly didn't mean any harm by it, the idea that the only thing stopping some people from sexualizing minors is legal repercussions is something that needs to end.

It happens all the time and it's unsettling, like when men make comments about young women and joke to their parents that she's going to be a "heartbreaker" when she's older, or that they're waiting for a celeb's 18th birthday to validate their objectification of her. It's not just creepy, it's illegal and perpetuates rape culture.

Standing up for Michael and defending her initial comment also discredits the many male victims who are also sexually harassed and abused. Yes, it disproportionately happens to women, but male privilege doesn't always protect men from sexual predators.

Everyone should be able to agree that the end goal is to live in a world where no one's body is sexualized or objectified without their consent, whether it's a 14-year-old teenager, a Hollywood actress, or a mother trying to breastfeed or buy her daughter a bikini. Sometimes even well-intentioned jokes get in the way of that happening.