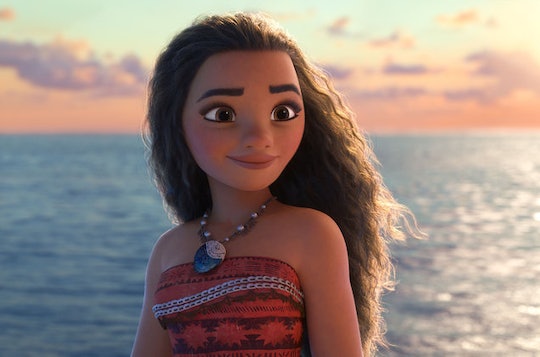 With Halloween just mere weeks away, the countdown is on for parents to find the perfect Halloween costume for their kids. As tempting as it may be to dress our kids in pretty much anything they want to be, that doesn't mean there isn't room for a more thoughtful approach about what does and doesn't constitute an appropriate Halloween costume. For one mom, her daughter's desire to be either Disney's Elsa or Moana for Halloween opened up a whole new dialogue about kids' Halloween costumes and cultural appropriation — and frankly, it's a post all parents should take a look at before heading to their local Halloween store.

Sachi Feris, a mom of two, blogs for Raising Race Conscious Children. Feris recently shared about the struggle she faced last month when it came to addressing cultural appropriation and her daughter's Halloween costume. After watching both Frozen and Moana within a month of each other, Feris' 5-year-old daughter had decided not only what she wanted to be for Halloween this year, but next year as well. For Halloween this year, Feris' daughter wanted to be Elsa, and Moana next year. Feris — who describes herself as a "White, Jewish woman of Russian, Polish, Lebanese, Syrian, and Cuban descent" — saw the obvious issues with her white, Jewish daughter dressing up as Moana — but an Elsa costume presented its own issues, too.

Feris writes she was hesitant about both costume choices, and the cultural appropriation that could be seen in each. She told her daughter that not only was it important to stop and think about how a Moana costume might be offensive to some — but exactly why.

Elsa is an imaginary or made-up character. Moana is based on real history and a real group of people…if we are going to dress up a real person, we have to make sure we are doing it in a way that is respectful. Otherwise, it is like we are making fun of someone else’s culture.

Many, many kudos to Feris for figuring out how to talk to her child about cultural appropriation in a way that is literally "explain it like I'm a 5-year-old." With her daughter knowing that Moana was off the table for this year, she decided to go as Elsa instead. But as Feris noted, her daughter is a brunette — which opened up a really powerful moment for her to talk her daughter about standards of beauty. Feris reaffirmed for her daughter that she could totally be Elsa with the blond braid — and her daughter really wanted a blond braided wig — but that she didn't have to, either.

There is one thing I don’t like about the character of Elsa. I feel like because Elsa is a White princess, and we see so many White princesses, her character sends the message that you have to be a certain way to be “beautiful” or to be a “princess”…that you have to have White skin, long, blonde hair, and blue eyes. And I don’t like that message. You are White, like Elsa—if you dressed up as a character like Moana, who has brown skin, you would never change your skin color. But I’m not sure I like the idea of you changing your hair color to dress up as Elsa—because I think Elsa’s character could also be a short, brown-haired character like you.

It's helpful to think about some of these obviously multi-layered and complex concepts in the inverse: What if a girl with dark skin wanted to dress up as Elsa? This actually became a huge issue at a Disney-themed event in Australia in 2015, when an Aboriginal girl who dressed up as Elsa was straight up race-shamed for doing so. "'I don't know why you're dressed up for because Queen Elsa isn't black,'" Rachel Muir recalled to Cosmopolitan about what a woman in the audience told her 3-year-old daughter Samara at the time. The other woman's child then pointed at Samara and reportedly called her ugly for being black.

Halloween can be a tricky time of year when it comes to the messages we send our kids. There are some obvious Halloween costumes to avoid: Don't dress your kids up in political costumes. Stay away from the overtly racist and culturally inappropriate costumes: A geisha is not a costume. A Native American chieftain is not a costume. And for the love of God, don't go dressed as Anne Frank for Halloween, either.

That's what makes Feris' post about her daughter's Halloween costume so important: She's taken the time to think very thoughtfully and intentionally about the messages she's sending her daughter about beauty, race, and appropriateness — and the messages her daughter's costume could send to other kids, too.

According to The New York Post, Feris' post has circulated in several mom groups on Facebook, where it's largely been praised for trying to tease out these issues. Others have offered criticism. An unnamed mom of one told The Post, "I think it’s silly to take children’s Halloween costumes so seriously. They’re kids, can’t they just be kids and not involved with the whole political correctness thing? Parents need to chill out a little bit."

Whether or not you think Feris is overreacting or totally on point, it's impressive that she's not only had the forethought to engage in these types of conversations with her daughter, but that her daughter is actually receptive to them, too — and especially at such a young age. Feris' post is hardly the final word on the matter of Halloween costumes and cultural appropriation, but she offered this final thought: "One thing is for sure, our discussions around appropriate and inappropriate Halloween costumes will continue."