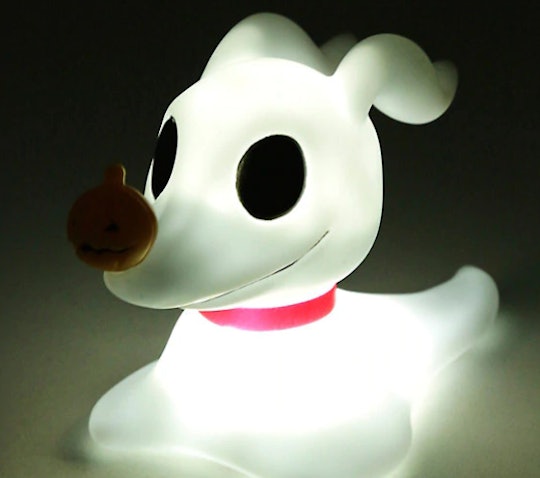 I am not too proud to admit to you that I still love a nice night light. The dark is scary don't hassle me. Children also love night lights but, let's face it, they don't get judged for it on account of being small and all. And I have to tell you, kids are definitely going to love this Nightmare Before Christmas night light. Not just because it will light up the darkness for them, obviously, but because it hits exactly the right note of Halloween-themed without being spooky. Because a scary night light would sort of defeat the whole purpose, wouldn't it?

For those of you who might already be fans of Tim Burton's 1993 holiday crossover classic The Nightmare Before Christmas, you know all about Jack Skellington's ghost-dog Zero. Much like many of the characters in The Nightmare Before Christmas, Zero is not as scary as he might seem. In fact, it's Zero who guides Skellington through the fog on Christmas Eve with his glow-in-the-dark pumpkin nose, effectively saving the day like another Christmas character we all know and love named Rudolph. And now there's a little Zero night light to help guide your kids through the darkness as well, or maybe even you because I'm telling you adults are allowed to like a little light too you know.

The Nightmare Before Christmas Zero mood lamp was created by Box Lunch, just in time to really get in the spirit of all things Halloween. Yes, I know it's September but you know everyone is ready for the greatest season of all called Halloween. The night light features a smiling Zero wearing a red collar and his trademark jack-o-lantern nose. His entire body lights up with an LED light that will help relax your child as they drift off to sleep, but be aware there is a 10 minute automatic shut off so hopefully they drift off pretty quickly. The night light can be ordered at Box Lunch for $23 and now here is some more good news, batteries are included.

So far reviewers are really loving this Zero night light, giving it a five-star rating and noting that it manages to cast just the right amount of light, not too bright and not too dim, which makes it a lot easier for kids (or adults) to sleep peacefully. Apparently having a dim light in the room is actually an ideal environment for kids to sleep, as per a 2018 report from The New York Times, since too much light can affect their melatonin levels.

As everyone prepares to ring in the Halloween season, this Nightmare Before Christmas Zero night light checks all the boxes. It gives off just the right amount of light during the night but it's also cute and festive to look at during the day when it's not in use. Plus it's fun, gentle spooky rather than in-your-face terrifying, which would not be a great idea for little kids.

Or adults. Because it's fine to want a night light as an adult, I promise.