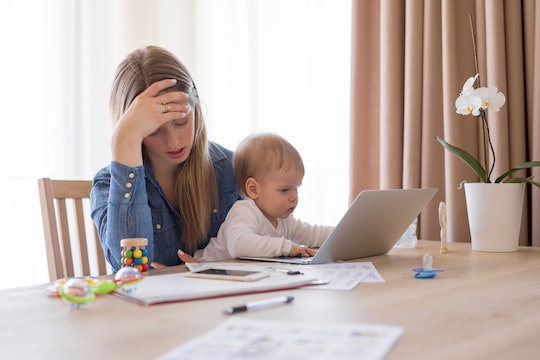 This Study Confirms Millennials Are The Poorest Generation To Date

There's an accepted narrative among the older people (including Gen X'ers like myself) that millennials have it easy. It goes something like this: they don't want to work hard, they want everything their own way, and they focus too much on wanting to see the world — they're too idealistic. Plus, all of the avocados! Well, it turns out, older people are actually all have it wrong. In fact, a new study has confirmed that millennials are the poorest generation to date. And poverty, as some of us parents know all too well, makes everything so much harder.

A study conducted by Pew Research Center found that, while not many households were headed up by a millennial, a significant percentage of the homes that were did not fare well. The study looked at 17 million households living below the poverty level; 5 million of those people were Baby Boomers (people between the ages of 52 to 70), 4.2 million were Generation X'ers (between the ages of 37 to 52) and 5.3 million were millennials (people born between 1977 to 1995). Considering that only about 28 million millennials living in the United States were the head of their household, that's a significant amount.

But, why are millennials poorer than the generations before them? It turns out there are several possible reasons, none of which have anything to do with Pumpkin Spice Lattes, too many iPhones, or avocado toast.

Millennials might have finally surpassed the Baby Boomers as the largest population group on the planet, but that doesn't mean they've got the world at their feet. Quite the opposite, the research found that millennials by and large are renting homes rather than buying them. In fact, 47 percent fewer millennials have purchased homes than people of the same age in previous generations, according to Fox Business.

And they aren't just renting because they're young. Besides the fact that the cost of home ownership has become insanely expensive since the mortgage crash of 2008, the research also noted that there were more millennial single mothers living below the poverty line than any other generation.

In fact, as of 2014 there were more millennial single mothers than married or co-habitating ones. While plenty of children are raised by single mothers all the time (including my own, in fact), the financial advantages of a two-parent home are huge.

It is difficult enough to raise a human with every advantage, but doing so below the poverty line can be beyond difficult. And kids are expensive, make no mistake; a 2015 study found that raising children accounts for a whopping 43 percent of an average income. Add to that the constant worry, stress, potentially underemployed, day care and health care worries... it all takes a toll.

Heavy student debt is another singular issue millennials are facing that their parents did not. Student debt is a monumental problem for that generation. While wages have stagnated, according to CNN Money, tuition fees have tripled in the past four decades. And when they retire? Good luck. Baby Boomers generally took advantage of pensions, but less than 14 percent of private sector workers will get the same advantage, as CNN Money reported.

Millennials really do have it harder than their previous generations. Yet, somehow, the narrative of spoiled, petted young people still prevails.