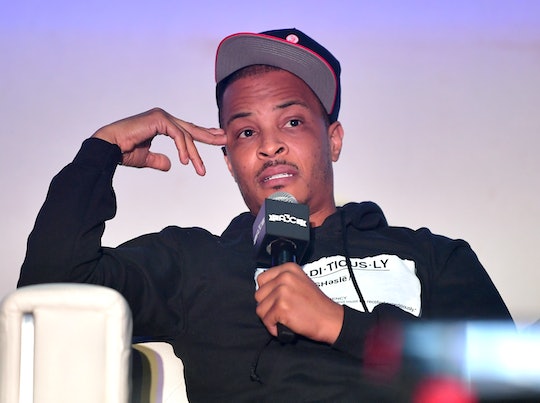 T.I. Asks His Daughters To "Please Forgive" Him Months After Making That Hymen Comment

Back in November, the world collectively cringed when rapper T.I. revealed on a podcast that he had regular "hymen checks" done on his daughter by a gynecologist. Well, months later, T.I. apologized to his daughter Deyjah Harris and her sisters, but failed to address the uncomfortable comments directly. With a lengthy Instagram post, he asked them to forgive him for "any and all imperfections that cause misunderstandings" between him and his girls.

T.I. made the comments in question while on the Ladies Like Us podcast, explaining that he would take Harris in to her gynecologist appointments and wait while they checked that her hymen was still intact. "And so then they come and say, ‘Well, I just want you to know that there are other ways besides sex that the hymen can be broken, like bike riding, athletics, horseback riding, and just other forms of athletic physical activity.’ So I say, ‘Look, doc, she don’t ride no horses, she don’t ride no bike, she don’t play no sports. Just check the hymen, please, and give me back my results expeditiously,’” T.I. said at the time, as BuzzFeed News reported, among other things. Of course, the world was quick to remind him that hymens aren't actually indicators of virginity.

After defending his remarks shortly thereafter, he posted a blanket apology to Instagram directed to his daughters on Monday, shortly after NBA legend Kobe Bryant, his 13-year-old daughter Gianna, and seven others were killed in a tragic helicopter accident.

"I love you girls more than my vocabulary will allow me to express," he wrote on Instagram. "You have grown so much right before my very eyes & blossomed into strong, brilliantly opinionated, independent young women. I'm so proud of you both and I love you to no end, more than you'll ever know."

"Please forgive me for any and all imperfections that cause misunderstandings between us...Charge my mind, not my heart. You see Life may throw us curveballs & deal us some pretty bad hands at times. But rest assured, you'll NEVER find yourself in a place too high or low for me to be there to catch you when you fall," he continued. "I just Can't let another second go by without letting you know while we're still here in this life together...You have ALL MY LOVE FOR ALL MY LIFE...& AFTER‼️"

The post didn't directly address what T.I. said about Harris' gynecologist appointments. He did, however, elaborate on the awkward statements shortly the podcast went viral. Appearing on the show Red Table Talk later in November, the rapper claimed that his intentions "have been terribly misconstrued and misconceived."

"I never said I was in any exam room. That is an assumption; that is a falsity. I never said it was being done present-day as an 18-year-old. I never said that her mother wasn't present," he said. His wife, Tameka "Tiny" Harris also commented, saying that the "check" happened back when their daughter was 15 and 16 years old.

As unpleasant as it is that T.I's "hymen check" comments have been dragged back into the light, they do raise important arguments about the need for parental respect over their children's bodies. And while it doesn't appear that Harris has responded to her dad's apology publicly, T.I.'s stepdaughter Zonnique Pullins did, writing, "I love you pops."