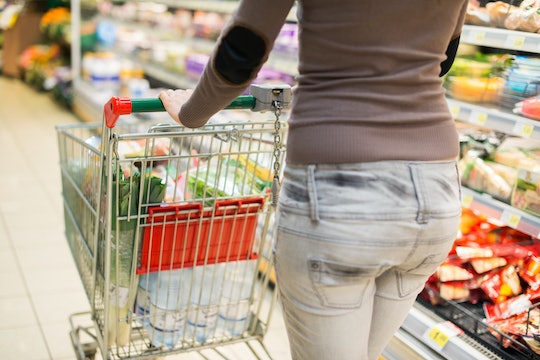 It is difficult to understand how some grown men still find it reasonable to stare at women and make them uncomfortable, and yet here we are. Hopefully any man who thinks this is still acceptable will watch this TikTok of a mom calling out a man she caught staring at her daughter and rightfully fear the wrath of a woman protecting her child. That is if common decency wasn't enough to stop them in the first place, of course.

A 21-year-old woman named Julie Frank was recently at the supermarket with her mom, Stephanie Ibarrondo, when she noticed an older man staring at her. Not glancing her way and then moving on with his own life, but actually staring at her in a way that was making her increasingly uncomfortable. She told her mom the man was upsetting her, as The Sun reported, and, like a lioness protecting her cub, Ibarrondo confronted the man. Which was not enough to dissuade him, apparently, as Frank explained to Buzzfeed: "My mom said, 'Excuse me sir, that's my daughter you're looking at.' He didn't say much other than, 'Mind your own business, lady.'" The irony of this must have been lost on the gawker, who proceeded to follow them down every aisle, staring at Frank.

And this is when things took a turn for the worse, as Frank documented in a TikTok video which has since gone viral.

The unnamed man was undeterred, even when Ibarrondo called him a "dirty old man" and told him to "stop looking at my f**king daughter's a**." He even went on to say that if Frank "dressed like a whore, you should look at a whore." Eventually he was escorted out of the store by security and the women quite clearly won the day, with many people taking to social media to praise this amazing mom who stood up for her daughter, writing messages like "Okay but what an awesome mom," and "We claim this woman. We protect her. A+ mama." Even better was a man who wrote, "As men we don't accept him."

The issue of men sexually harassing women has been around pretty much since there were men and women, but fortunately there is a cultural shift happening. Largely because of videos like this one that call out harassment in real time and show someone standing up for a women who feels uncomfortable.

Stephanie Irrabondo's response to seeing her daughter being sexually harassed should be the norm, regardless of whether you are a mother or not. If you see something, say something. Period.