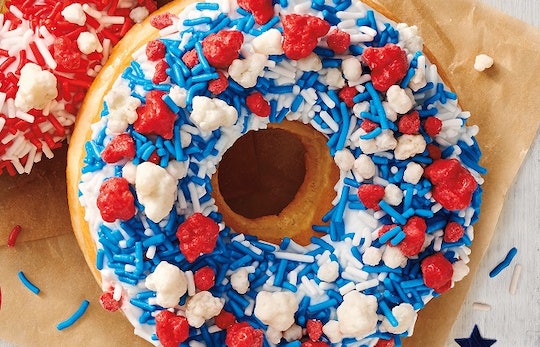 Tim Hortons Is Putting Popping Candy On Their Donuts, & OK, It's Kinda Brill

Independence Day and Canada Day are nearly upon us, a time in July when Americans and Canadians can come together and agree that the best way to celebrate is exploding the sky… or our stomachs. That’s right, coffee juggernaut Tim Hortons has promised us fireworks-themed donuts in honor of Canada day (July 1) and the Fourth of July.

Tim Hortons is heralding these holidays with this almost portentous press release: “This year, Tim Hortons US is celebrating both Independence Day and Canada Day with a BANG with new Fireworks Donuts.” Pardon me, but where exactly is this “BANG” going to happen? Well, gird your dental work, as the Fireworks Donuts come with a topping of “exploding” candy. The press release states, “Get your taste buds ready because this is a donut that actually POPS. With popping candy, that is.” Hot dang, are these donuts a delicious treat, or some sort of high-tech sugary weapon?

Normally, if I had to pair “bomb” and “donut” in a sentence, it would be, “A donut? I probably shouldn’t, that’d carpet bomb my intestines,” though far less coherently as I’d have to negotiate speaking between large mouthfuls of half-chewed donut that I’d frantically shoved in my mouth naught moments before. So the concept of an actual, exploding donut brings an exciting new thrill to my furtive donut eating. To be fair, these candy toppings really aren’t capable of much in terms of combustion force: they seem to be similar to Pop Rocks, which we know elicit more of a pleasant tingle than a great big mouth-shattering kaboom.

Now, I know what you’re thinking: “If I wash down one of these Fireworks Donuts with a refreshing splash of carbonated soda, will my stomach explode in a beautiful yet deadly display of red white and blue sprinkles?” If you trust Becky from my 1st grade science class, then yes, Pop Rocks combined with soda has the capacity to explode an entire elephant. But according to Snopes, you have nothing to worry about if you want to down a root beer with your Fireworks Donut.

Are these fireworks donuts legal in your state? Well, I’m not a lawyer, but I’m going to say yes, these may be some of the safest “fireworks” out there, at least when ingested in responsible amounts. Will they feel like fireworks are exploding in your mouth? I haven’t had a chance to eat one of these bad boys, but I’m guessing if they’re like how I imagine (a Tim Hortons donut combined with Pop Rocks), it’ll taste more like a fluffy pastry gently massaging the insides of your mouth. Honestly, that doesn’t sound half bad, and it’s a lot more family-friendly than illicit fireworks bought from a dealer simply known as “Joe Kaboom”

So, don’t expect a Looney Tunes-esque explosion of TNT-laced donuts. But do expect these patriotic pastries to bombard your local Tim Hortons soon, as according to the press release, “The patriotic donuts will be available starting June 26 at participating restaurants for a limited time only. Call your nearest Tim Hortons® restaurant to confirm price and availability.” Have a fire extinguishers at the ready, or at least a glass of cold milk.