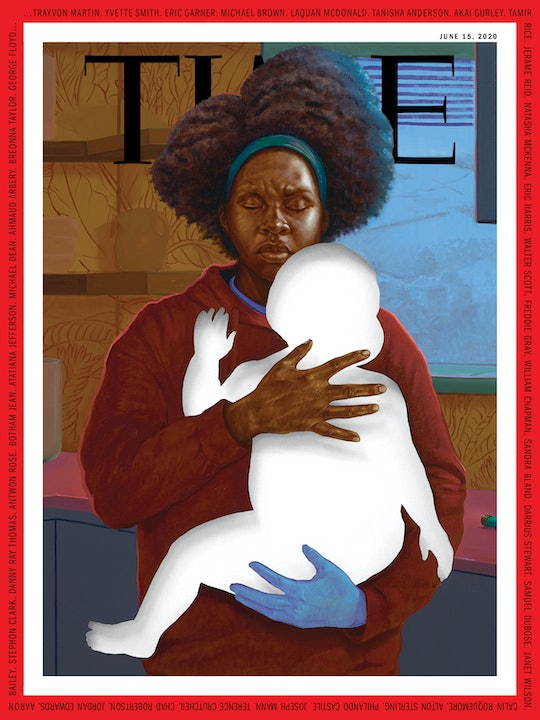 In the wake of George Floyd's killing and nationwide protests denouncing systemic racism, TIME dedicated its newest cover to Black lives that were taken, in many cases, as a result of police brutality and the pain, loss, and heartbreak too many Black mothers have had to endure.

In a powerful portrait called "Analogous Colors" that will appear on the June 15 issue of TIME, artist Titus Kaphar painted a Black mother with her eyes closed, clutching a baby who has been cut out of the picture, representing what's been taken from Black mothers who have lost their children as a result of systemic racism.

"This Black mother understands the fire," Kaphar wrote of his painting that will appear on TIME's upcoming issue. "Black mothers understand despair. I can change nothing in this world, but in paint, I can realize her. That brings me solace … not hope, but solace. She walks me through the flames of rage. My black mother rescues me yet again. I want to be sure that she is seen. I want to be certain that her story is told. And so this time, America must hear her voice.”

Floyd's death in police custody on May 25 has been described as the "tipping point" for America in regards to racial injustice and police brutality, as Rep. Ayanna Pressley told reporters earlier this week, igniting protests and calls for justice in all 50 states. Distressing footage captured 46-year-old Floyd's last moments as a white officer knelt on his neck for nearly nine minutes. In it, as CNN reported, Floyd could be heard calling out "Mama! Mama! I'm through!" Floyd's mother had died two years prior.

Kaphar — who created another cover for the magazine back in 2014 in response to protests in Ferguson, Missouri after the fatal shooting of 18-year-old Michael Brown — explained in a TIME article about his new cover art that, in this mother's expression, he sees the "Black mothers who are unseen, and rendered helpless in this fury against their babies."

Along the border of TIME's upcoming issue, you'll see the names of "35 black men and women whose deaths, in many cases by police, were the result of systemic racism and helped fuel the rise of the Black Lives Matter movement," which the magazine noted are "merely a fraction of the many more who have lost their lives because of the racist violence that has been part of this nation from its start." Those names are:

The day after TIME released its newest cover, one of the victims on the border, Breonna Taylor who was shot and killed by police in March, would have celebrated her 27th birthday. Her own mother, Tamika Palmer, has been fighting to get her justice ever since. "I want these officers arrested. I don't think they should still be on payroll. That's justice for Breonna. She's not here. She's still not getting paid. She doesn't get to go to work every day," she told MSNBC on Friday. "I'm just grateful that people are finally listening and standing up for it, the injustice."

To help support the Black Lives Matter movement and join the fight for justice, consider donating to one of many organizations fighting for racial equality.