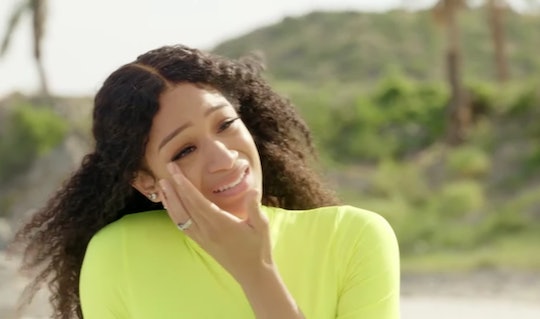 More than six months after rapper and actor T.I. revealed he attends his daughter's gynecologist visits to check that her hymen is still intact, the world is finally getting to see how his statements impacted his daughter. In the latest episode of VH1's T.I. & Tiny: Friends and Family Hustle, Deyjah Harris, T.I.'s daughter, addressed the remarks about her virginity and gynecologist visits and said she was "shocked, hurt, angry, and embarrassed."

"Things are completely uncomfortable for me right now," Harris said in a confessional interview. "We're all together in this house so I have to see my dad and be around him."

Harris went on to reveal she'd learned of her father's comments through social media. "I'm scrolling on Twitter and I see that I've been tagged in a post," she said. "The only word that I saw was 'gynecologist' and I didn’t even need to read the whole title 'cause I just knew. My heart sank. I'm very shocked, hurt, angry, embarrassed."

T.I. came under intense criticism in November when he told the Ladies Like Us podcast that he'd been taking Harris, then 18, on "yearly trips to the gynecologist to check her hymen" since her 16th birthday. The podcast episode featuring T.I.'s interview has since been deleted.

T.I.'s comments even prompted Planned Parenthood to speak out on the topic of hymens and virginity in a lengthy educational Twitter thread. "Idk who needs to hear this but virginity is a made-up social construct, and it has absolutely nothing to do with your hymen," the healthcare provider tweeted. "Some people think you can tell if someone’s had sex before if their hymen is stretched open. But that’s not the case."

As outrage over his comments mounted in the weeks that followed, T.I. appeared on an episode of Red Table Talk to "clear up any misconceptions" about his parenting. There he told host Jada Pinkett Smith that he'd "began to embellish and exaggerate" in his Ladies Like Us interview and people took his comments "extremely literal." He has since issued a public apology to Harris and her sisters.

In Monday's episode of T.I. & Tiny: Friends and Family Hustle, Harris discussed the incident with her cousins, telling them that what her father had said was true. "Yeah, he goes with me. It's definitely been going on since 14 or 15," she said. "It's not like I could have said no. I couldn't have said no."

Harris then claimed her father employed a double standard with her brothers when it came to sex and virginity. "I do think my dad treats me differently than the boys when it comes to the subject of sex and supervision," she said. "My dad even jokes with King about becoming a baby daddy. He would never joke like that with me."

When Harris' cousins encouraged her to talk to her father about the situation and how she feels, she claimed she wouldn't be able to "get through to him" because he "always plays victim" when confronted. "I just don't really care to be around him right now," she said. Harris said the situation had caused her to look at her relationship with T.I. differently and began to tear up when asked if it had put a strain on the relationship. "This situation is just so traumatizing for me," she said.