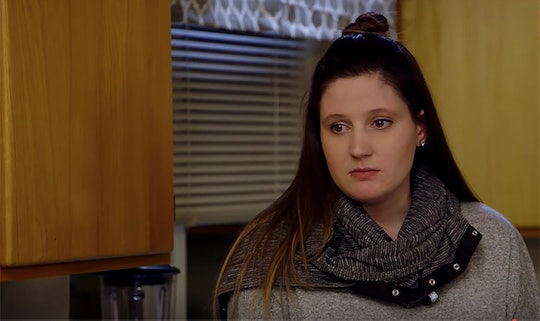 Little People, Big World star Tori Roloff often documents her day-to-day life as a mom to her *adorable* 1-year-old son, Jackson. From cute videos of Jackson playing with his toys to photos of his major milestones, Roloff does a fabulous job of cataloging his young life for fans. So, it's no surprise that Roloff took to Instagram on Monday to inform her followers about an important update concerning Jackson. Unfortunately, Tori Roloff's son suffered an arm injury, and she described the event as "stressful." The good news, however, is that many of Roloff's fans are sending her messages of support to get her through this difficult time.

Although it might be hard to believe, Jackson celebrated his 1st birthday in May. Times flies, right? And since Jackson is growing up, it's inevitable that he'll have an accident or two. Babies aren't very careful creatures, to say the least, and they aren't very graceful either. Sadly, Jackson learned this lesson the hard way when he attempted to walk during an afternoon of playing.

"Nothing slows this kid down... the past 24 hours have been pretty stressful but this kid has shown us time and time again just how much of a trooper he truly is," Roloff elaborated to fans, according to Instagram. "He hurt his arm yesterday afternoon playing and trying to walk like one year olds do. We thought maybe something called 'nursemaids elbow' but after two times of a doctor trying to reduce it to no avail (which by the way is absolutely the worst thing to see your child in that much pain) it could possibly be a fracture but still not sure."

Aww, poor guy. It sounds like the struggle is all too real for baby Jackson. I don't doubt, however, that Jackson will get the hang of things sooner than later. Practice makes perfect, and Jackson is one tough kiddo.

As for what nursemaid's elbow is, it's a common childhood injury that occurs when a "ligament slips out of place and gets caught between two bones of the elbow joint," according to Kid's Health. Yikes. It's a relief that Jackson isn't suffering from this condition.

So, what's the plan going forward with Jackson's injury? Roloff explained, according to Instagram:

So this poor thing is stuck in a splint until we can know for sure. He has not let it slow him down though and is back to his happy smiley self-thank goodness! Thank you for your thoughts and prayers for baby j! Little man is on the mend and will be back to conquering the world soon! #babyjroloff #zandtpartyofthree.

Well, it's a good to hear that Jackson is "on the mend." Still, it's scary to deal with a child's injury — especially when you don't know what is.

"Poor thing. Let's hope it will heal well," one fan commented, according to Instagram. "Things like this can happen, especially if he's trying to walk. He certainly doesn't let anything stand in his way of reaching his milestones. Hugs and a kiss to him from Wisconsin."

Another person chimed in: "I totally understand:)) my little one just had that happen but it turned out to be the 'nurse maids elbow' hopefully it heals up quickly. Best of luck!!"

"Awe poor little man. Everybody hates to see things like this happen but they always seem to happen," a commenter said. "Theres gonna be many more bumps in the road stay strong for him and he'll be ok."

"You're absolutely right it is so hard as a parent to watch a Dr reduce that kind of injury," a parent penned. "I think I cried worse. He looks great. Hugs to you and dad. (((Hugs)))."

It's really nice to see fans offering words of encouragement instead of unsolicited medical advice and judgment. Roloff simply deserves support during this time, and one can only hope that Jackson's injury heals sooner than later. Feel better, baby Jackson.