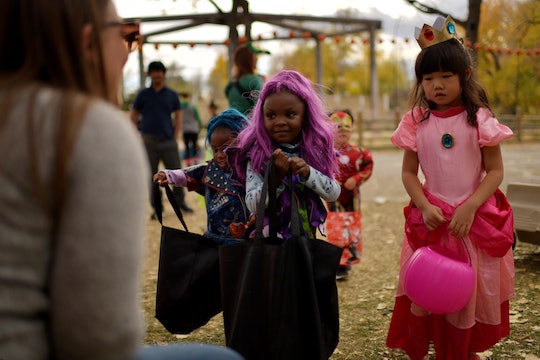 It was Halloween 2012, and my son’s second year trick-or-treating within my parents' gated community — this time dressed as a ninja turtle. We were surviving off WIC, SNAP, and Medicaid programs, and lucky my folks were allowing us to stay with them until we got back on our feet. As we approached one of the many culs-de-sac in the neighborhood, a woman handing out candy coaxed us to get closer.

“Hi! Are you all from around here?”

“Yes, actually. We live just down the block,” I replied, a bit bewildered at the question. She tilted her head just a bit.

“Oh, OK. I thought maybe you weren’t from around here,” she said, and then, leaning in, whispered, “because there’s a lot of people coming here tonight that aren’t from here. You might want to watch out for them...”

On Halloween, kids can wear a costume and pretend to be anyone and anything they want to be, regardless of their parent’s income. There is no official zip-code requirement for walking up the path to someone's door and yelling “Trick or treat!” and yet every year there are people who want to find a way to ruin it for others.

One year the homeowner's association decided to issue badges to people who lived there and if you didn't have one on, the houses were not supposed to give you candy.

Back in 2014, a Dear Prudence letter went viral when a woman asked if she could basically refuse to give candy to kids who weren’t from her neighborhood (a neighborhood that, she admitted, was full of doctors and lawyers). Prudence was clear that this was absolute nonsense and this woman needed to get off her high-horse and hand out the goods no matter what. There are, however, others out there who need to hear that bit of honest advice.

“I grew up on ‘that street’ in town where everyone came to trick-or-treat. People would drive in from the country,” says 38-year-old Kathryn Hively. Growing up in Virginia, Hively recalls one memory in which her neighbors didn’t quite share her family’s enthusiasm for crowds.

“I do remember trick-or-treating with my friends [who didn't live on my street], and one of the neighbors gave me a special treat bag instead of a piece of candy because [they said], ‘You actually live here.’ It was the first time I thought about the distinction, and I remember being a little uncomfortable because my friends didn't get bags,” says Hively, who now lives in New Jersey.

Writer Brette Sember also recounts an unfortunate reaction to “outsider” kids trick-or-treating from the local homeowners' association. Sember’s home is directly behind a wealthy development and her children would always head there to trick-or-treat as the homes on her street were very widespread.

“Usually everything went fine, but one year the homeowner's association decided to issue badges to people who lived there and if you didn't have one on, the houses were not supposed to give you candy,” recounts Sember. Fortunately, the 50-year-old, who is a mother herself, says the badges didn’t last.

“As far as I'm concerned, they are part of my neighborhood, right behind my house, so I didn't have a problem going there. I think that you should welcome anyone who comes to your door. If you don't want to buy tons of candy, then turn out your lights when you run out,” adds the Buffalo, N.Y., resident.

For the most part, I grew up fairly low-income. Halloween candy was almost always from one of those dollar-store candy grab bags (lots of Tootsie Rolls and Smarties and Dum Dums). It was only when we ventured out to a different neighborhood that we might finally begin to see fun-sized Kit Kats or Snickers (fancee), not to mention houses decked out in some seriously spooky decor.

For one night, trick-or-treating served as a great equalizer. Even if 500 kids from lower-income households came to the home of a rich or well-off individual, at the end of the night, they were still headed back to their homes. And the person giving out the Snickers bars? They’ll continued to get a good night's sleep in their eight-bedroom McMansion on their high-thread count sheets.

Because studies (like this one by Georgetown University) show that being born rich is a more solid indicator that you’ll be a successful, wealthy adult than doing well in school, and giving poorer kids some candy on Halloween isn’t going to change that. It’s one small window of time that rolls around once a year. For some kids, it's the only time individuals from different socioeconomic backgrounds get to play in the same area. And many home owners welcome the influx.

Forty-seven-year-old Lisa Schmeiser says that she used to live in one of the "nicer" neighborhoods and would distribute about a dozen bags of fun-sized Snickers every year, no matter where the trick-or-treaters were from.

“I loved it! There are few things as purely joyful than sitting on the front lawn with a cocktail, a spooky playlist on repeat in the background, dropping a handful of Snickers bars in a little kid's bag and asking the parents if they want some candy, too,” says Schmeiser, who works as a content director at Informa.

They had disallowed trick-or-treating in my neighborhood because it was deemed dangerous.

Houston-based Monica Gri says that she also had many kiddos from low-income neighborhoods come to her area to trick-or-treat when she was growing up — and that it wasn’t a bad thing.

“It’s so much fun to see the kids eyes light up at the bowls of candy, and to see all walks of life come together for one night of safe, innocent fun. Due to my experience growing up, Halloween has always been one of my favorite days of the year,” says the 34-year-old who works in clinical research business operations.

Moreover, kids like me, who sometimes got to trick-or-treat in more affluent neighborhoods, remember that and are grateful for the chance to forget the difficulties of their own home lives.

“I was one of the poorest kids in my school and was best friends with who many considered to be the richest. They had disallowed trick-or-treating in my neighborhood because it was deemed dangerous, so I often went to her house and we did her neighborhood,” says Nina McCollum, who grew up in Mansfield, Ohio. McCollum describes being in the other neighborhood as though being in a “whole new world.”

“Full-size candy bars, long walks through huge lawns to get to front doors — it was so exhausting we usually only did her street and maybe one other before we were pooped,” says the 50-year-old, who now resides in Cleveland.

Back on the street last year with the neighbor, I raised my eyebrows, grabbed my son, and scrambled to get to the next home before I gave her a piece of my mind. It was one of those moments where I remembered that some people don’t get what Halloween is about and instead have to find a way to ruin things for no good reason. Because here’s the thing: Halloween isn’t about people “staying in their neighborhoods,” or hoarding your candy only for “certain” kids. It’s about families having a fun time out and about, breaking down whatever barriers keep them from speaking to one another, enjoying costumes and decorations and treats. It’s the one time we can actually see a bit of wealth redistribution going right.

This year, I’ll be walking my kiddo to the blocks with larger homes, the ones where there’s still street parking because the homes are larger and the roads wider than our own. I’ll be taking him to get at least some of those larger-sized, brand-name candy bars. Because right now, honestly, the wealth gap is wider than it’s been in a long time, trickle-down economics is still a damn joke, and those of us who are still struggling to get by will do so by whatever means necessary — especially on Halloween.

But mostly? We don’t have to justify our trick-or-treating choices with anyone, so suck on that Dum Dum.