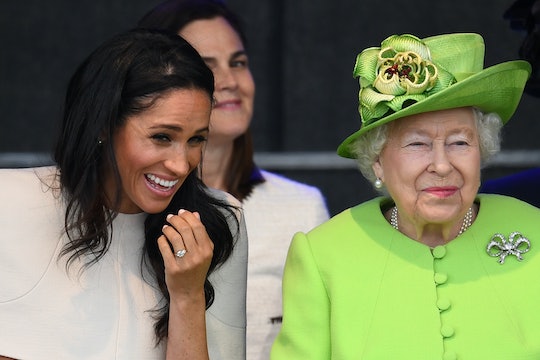 As a member of the royal family, Meghan Markle is expected to keep her political opinions to herself. After all, the Queen has managed to keep her own personal beliefs or thoughts about politics private for decades. But here's the thing; Meghan Markle was already a public figure before she was a royal, and back when she was an actress and humanitarian she was very comfortable sharing her opinions... which are still on record for certain politicians to apparently get in a pout over and lash out about way after the fact. Donald Trump's comments about Meghan Markle in an interview with The Sun show he's not super interested in personal growth when it comes to dealing with powerful, intelligent women. Or perhaps women in general, to be honest.

Romper has reached out to the White House for comment but did not immediately receive a response.

President Trump and his wife, First Lady Melania Trump, are in the process of getting ready for a visit to the United Kingdom, Ireland, and France next week, per CNN. To prepare for his visit the President sat down with The Sun for an interview to express some of his thoughts on the current political climate in the country as well as his upcoming visit with Queen Elizabeth, Prince Charles, the Duke and Duchess of Cambridge, and Prince Harry.

While Meghan Markle will not be a part of the official visit because she is currently on maternity leave with her new baby boy Archie, she was definitely part of the conversation. Perhaps especially because back in 2016, before Trump was elected as the 45th President of the United States and before she was the Duchess of Sussex, Markle made her feelings about the "divisive" nature of Donald Trump abundantly clear in an interview on The Nightly Show with Larry Wilmore.

At the time the former Suits actress labeled Trump a "misogynist" and said she would consider moving to Canada if he became president, as per Elle:

It’s really the moment I go; we film Suits in Toronto and I might just stay in Canada. Yes, of course, Trump is divisive, think about female voters alone, right? I think it was in 2012 the Republican Party lost the female vote by 12 points; that is a huge number and with as misogynistic as Trump is, and so vocal about it, that is a huge chunk of it.

Apparently she decided to go even further afield.

President Trump was not aware of her comments back in 2016 and when The Sun made him aware he had this pat response ready to go:

Hold on.. where have I heard that before? Ah yes, another time when an intelligent, articulate woman named Hillary Clinton challenged him and he resorts to name calling during the third presidential debate in 2017.

Trump did go on to say he thought Markle would make a "very good" princess who was born American, so that was awfully generous of him.

All I can say is this; little baby Archie could not have picked a better time to be born. Now Markle can avoid getting stuck being that other American at dinner with Trump and trying to put on a smile.

Although it should be interesting to see how Prince Harry deals with a man who just publicly referred to his wife as "nasty."