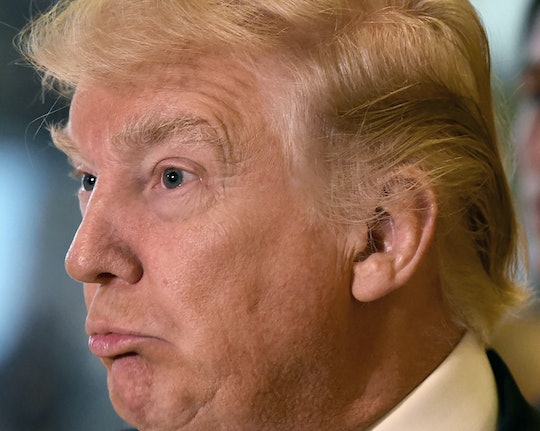 A World Waits With Bated Breath For This Tweet

Aside from looking forward to hearing President Obama address the country for the last time, one of the biggest draws to the president's final speech on Tuesday night was, of course, waiting to see what Trump's response to Obama's farewell address would be. As of late Tuesday night, the president-elect had not made any statement, or tweeted, about President Obama's farewell speech to America. It's a little odd when Trump goes silent on Twitter. Normally, Trump simply can't stop, won't stop when it comes to responding to people who disagree with him or question the future of the country under his administration.

But after a unifying speech from Obama about coming together and working past our differences (he even quoted Harper Lee to make the point), the incoming president kept his tweeting fingers away from his phone. But if he does respond, it will mean everything when it comes to what the American people have to expect from the next administration.

Seriously — actor Meryl Streep didn't even say his name at the Golden Globes on Sunday and the president-elect woke up nice and early on Monday to call her a "Hillary flunky" and an "overrated" celebrity. (Hmmmm, did she only earn just a handful of those Oscars and Golden Globes? Asking for a friend.) So it was pretty much a guarantee that Obama, and whatever he had to say about the state of the country — always a point of contention between the outgoing and incoming president — was definitely going to be on Trump's mind. But as of Tuesday night, the president-elect was mum about whatever Obama had to say leaving office.

Trump doesn't tend to stay quiet when it comes to these kinds of situations, but people can surprise you. Then again, it's likely that Trump and his transition team was busy negating rumors making their way around social media on Tuesday afternoon that Trump was a little too close for comfort to Russian operatives. Some things are more important than bashing whatever people are watching on television. Trump still might find it in him to respond to the farewell speech.

Obama's address on Tuesday focused on the achievements of his administration, most of which Trump believes aren't accomplishments at all, which would be a predictable line of attack if the president-elect responds at all. The address was also a strong lecture about how Americans should not let party lines come between the greater goals for the country — even if that means compromise.

One of the focal points of Obama's speech to the American public was about the value of listening to people who disagree with you — he even joked that people should stop fighting with others on social media and go out and meet their own enemies. So it's possible that Trump might just let Obama have his final goodbye without a word.

Let's hope so, for the sake of hope and change.