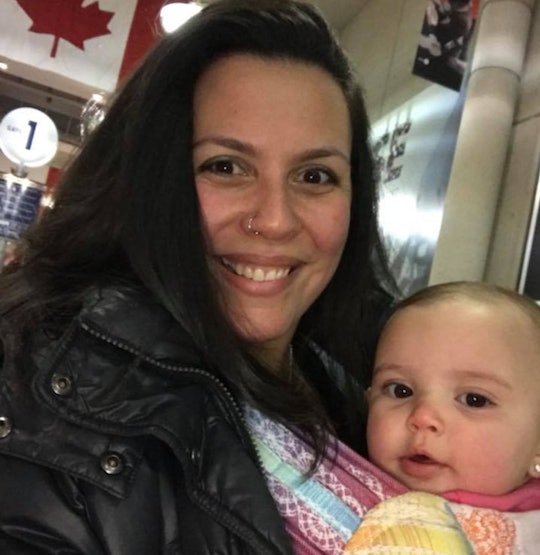 From passengers being forced off flights they paid for, to pets dying in flight, flying has become a bonafide nightmare. Then again, when you're a mom traveling with children, flying has never been "easy." So, what happens when the TSA forces a mother to get rid of formula just before boarding a 10-hour flight? That’s exactly what happened to 32-year-old Clare Wight of Wisconsin, and her experience isn't uncommon.

On March 19th, 2018, Wight, a childcare consultant for Cultural Care Au Pair, drove an hour to Rochester International Airport with her 7-month-old daughter, Fiona. She fed her daughter a bottle of formula in the car, confident that she would be able to feed her again on the flight. She had brought a brand-new, sealed can of baby formula, along with some extra powdered formula in a bottle for their upcoming 10 hours of air time (from Rochester to Chicago’s O’Hare airport to Toronto), trying to be as prepared as possible. When she made it to the TSA checkpoint, however, the trouble began.

“They couldn’t wrap their minds around me being Brazilian having an American baby going to Canada,” Wight tells Romper. She says TSA employees were perplexed as to why Wight and her daughter were from different countries. Wight is a citizen of Brazil and a 12-year permanent resident of the United States. Phone calls were made to ensure she was clear for international travel with her child. “I was trying to be nice as pie cooperating. Take off your shoes, take the baby off the carrier... I did all that," Wright says.

Then TSA agents asked Wight if she was traveling with any food items. Wight pulled out all of Fiona’s baby food, including a 12-ounce bottle of water, some puffs, a small baby bottle with some powdered formula in it, and a factory-sealed can of more baby formula. The agents inspected the items and strip-tested the outside of the formula can for explosive device residue.

Wright says it was at this time that she was patted down. "[They told me] 'We’re gonna have to do a pat down because one of your items failed the test',” Wright says. TSA then made more phone calls and, eventually, delivered the bad news. Wright says they told her she was going to have to surrender the formula.

To add insult to injury, one TSA agent asked Wight why she couldn’t just breastfeed her child.

Like any other mother, Wright was upset. What would her baby eat during the next 10 hours? She asked if she could move the formula into another container, but the agents declined. She was told she would be allowed to check the can of formula (if she paid $25), but that there was no way they would allow the can, or its contents, inside the plane. This struck Wight as odd. She decided not to pay the extra money to check the formula, since she only needed it for the duration of the flight. Still, her daughter would be hungry for hours on end.

“I was almost crying,” Wight tells Romper, stating that the entire ordeal took roughly 40 minutes. By the end of it, an airline employee came by to find her and ensure she made it to the flight. She had a minimal amount of time to hunt down potential alternatives to feed her daughter, who was just barely starting solids.

To add insult to injury, one TSA agent asked Wight why she couldn’t just breastfeed her child. Write tells Romper she explained to the agent that she "kinda sorta" can breastfeed, but not enough to keep her child adequately fed. "It was the ultimate reminder that my body failed and I can’t feed my child," she says.

Eventually, Wight was able to procure a small fruit pouch from an airport Starbucks during her layover, which she fed her daughter along with the one bottle she was allowed to take on the flight, and some puffs.

Wight’s husband, Eric, sent a formal complaint to the airport and received the following message, announcing that this additional screening was due to a “pilot program the TSA is testing”:

According to TSA's instructions on traveling with children:

Inform the TSA officer if you do not want the formula, breast milk and/or juice to be X-rayed or opened. Additional steps will be taken to clear the liquid and you or the traveling guardian will undergo additional screening procedures, to include a pat-down and screening of other carry-on property.

There is no clear information regarding procedure for formula, though Ms. Wight states no further testing was done on the can, and no testing was done on its contents (nor on the other formula in the snack bottle). Romper reached out to Rochester Airport for further clarification on this pilot program and for further commentary on the matter, but have not heard back at the time of publication.

As previously mentioned, Wright isn't the only traveling parent to have her baby's food confiscated by the TSA:

In 2017, a dad going by Tamachan5 on Reddit, wrote, "So, TSA decided that my daughters lunch was dangerous and had to be discarded." In 2016, actress Rose Byrne had her breast milk confiscated by the TSA, and in 2014 a mom from California reached a settlement with the TSA after agents attempted to x-ray her breast milk. According to TSA.gov, all liquids confiscated by TSA agents are, in fact, thrown away.

Wright's situation has left mothers who have read Wight’s public Facebook post confused. According to TSA’s website, and per their rules, baby food items should always be allowed to pass through security, as long as it passes screening tests. That said, many parents have argued that TSA is frequently inconsistent with its screening policies, inconveniencing families and especially babies. U.S. Representatives and co-chairs of the Congressional Maternity Care Caucus Lucille Roybal-Allard (D-CA) and Jaime Herrera Beutler (R-WA) have reached out to TSA on this matter in the past, "urging full compliance with a current liquids exemption for mothers and passengers traveling with breastmilk and formula" due to the "harassment-like scrutiny from TSA employees" many parents have complained about. Still, it continues to occur.

Wight, who travels frequently for her job in au pair consulting, tells Romper she has never had trouble flying with formula before. But while this was Wight's first time experiencing this particular treatment, TSA has been accused of not following its own policy by other traveling parents. Just last summer, a Colorado mom had her breast milk tossed out by TSA after it set off an alarm. In that instance, TSA apologized for not following protocol to resolve the alarm. It remains unclear why additional screening measures, such as the pat down and opening of the container, were not sufficient to clear the formula for travel.

Romper spoke with a TSA agent, who wished to remain anonymous, about what she thought of Wright's incident. She says, “When they said it failed, they could have been more clear with her as to why as well. As far as to why they gave her that option to put it in her check bag, I don’t know.”

Romper asked the anonymous TSA employee if it's possible the test result was a mistake. “It’s possible,” she says. “I’m not gonna say it doesn’t happen, but it’s not a risk they are willing to take.”

In 2015, ABC reported on how easy it was for undercover Homeland Security to smuggle bombs and guns onto planes, and despite TSA’s screenings. The following year, in Sept. 2016, Vox reported more extensively on the problem, citing papers published in the Journal of Applied Economics and Transportation Research that found post 9-11 screenings discouraged air travel, instead increasing the number of drivers on the road, which correlates with a rise in traffic fatalities. And just last year, the American Civil Liberties Union (ACLU) found that TSA’s Screening Passengers by Observation Techniques program, known as SPOT, is unreliable and possibly targets minorities.

While Wight does not believe that race played any part in her specific experience, the TSA papers obtained by the ACLU under the Freedom of Information Act found that the TSA focused screening efforts on Arab, Muslim, and Latino travelers despite repeated TSA assurances that it, "does not profile travelers based on ethnicity, race, or religion," per The Guardian.

Wight (now back home in Wisconsin) tells Romper she made it to Canada just fine, where her friend was waiting for her with a brand-new can of formula. She went to a Pink concert, enjoyed the city, and made her way back to the United States with more cans of carry-on formula, and no issues.