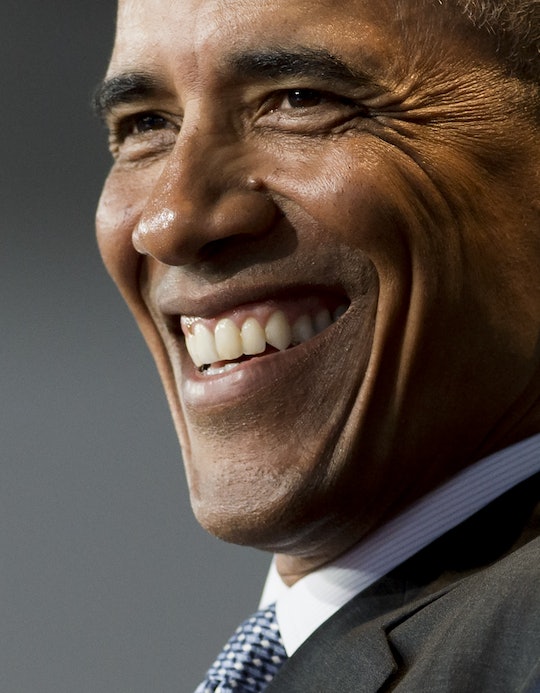 The Echo At Obama's Farewell Speech Stole The Show

Tuesday night, President Obama addressed the nation from Chicago for the last time as a sitting president. It was a somber event — saying goodbye is never easy. But the jokes about the echo at Obama's farewell address might have overshadowed his final goodbye to the American public. Because let's face it: When it comes to hokey goodbyes, Twitter is always ready to point out the problems.

Obama's speech was attended by almost 5,000 people in Chicago and people in attendance paid a lot of money for those tickets, even though it was technically "free."

But despite the crowds, Obama's farewell was a heartfelt speech. It was all about the future. He spoke to his legacy for a bit, but then went on to talk to the American public about his legendary message of "hope and change," crossing political aisles to work towards a common good, and even professed his undying love for Vice President Joe Biden. (And his wife and daughters, too.)

His speech hit on almost all of the main talking points you might expect from an Obama speech, but there were some early glitches that might have distracted from the message. There was an early protestor that was quieted with a "four more years chant," but also an echo.

But the echo didn't seem to bother the outgoing president. Instead, he rose above the challenge (seriously, he's dealt with worse) and managed to finish his address. At the outset, though, the audio issues, along with some protestors, did seem to startle the president. Luckily for him, security in the arena seemed to get rid of the distractions. The crowd began to chant, "four more years," to drown out any detractors. The audio issue was corrected (kind of) by the end of the speech. The power of Obama was in full force.

In fact, the echo was the least of Obama's distractions during the speech. In addition to the protests, the echo, and the "four more years" chant, people in the crowd were audibly upset every time the president mentioned that he was leaving office. Some in the crowd chanted, "NO!" when he mentioned that this speech would be his "final" one. Earlier in the evening, Obama referenced the upcoming inauguration. The crowd began to boo, but Obama shut those chants down with just a nod and a "hey now," and redirected the crowd's attention.

It worked. Always classy, Obama worked through some audio issues and a rowdy crowd of supporters and protestors to give his final speech to the American people.

That he could keep his calm under that kind of pressure is a testament to the 44th president's legacy. Remember that the next time a meeting you're running at work goes off the rails due to Power Point issues or your toddlers start to revolt at the sight of your dinner offering. Yes, you can.