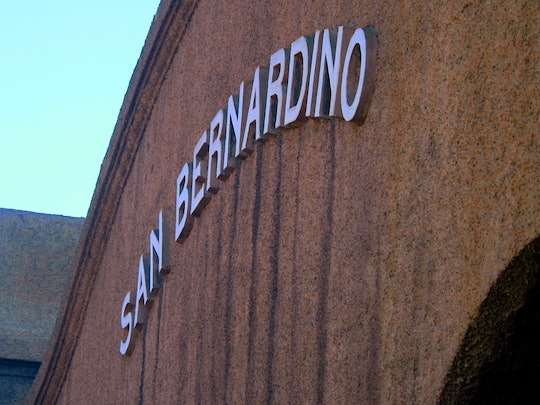 Earlier: On Wednesday afternoon, a shooting took place at Inland Regional Services in San Bernardino, California, a nonprofit agency that serves individuals with developmental disabilities. According to the New York Times, more than 670 staff members have served over 30,000 people since the agency was first opened in 1971. While little is known about who the shooters involved in the San Bernardino shooting are, reports are trickling in that upwards of 14 people have been killed, 17 more have been injured, and police confirm that up to three suspects are involved. Police are reportedly in search of one to three suspects who, witnesses told police, left the scene of the shooting in a black SVU. Witnesses also told police they were possibly wearing body armor. Police have confirmed that two suspects are "down."

The horror unfolding in San Bernardino right now is one Americans know all too well. No matter how you look at it, the United States has a problem with gun violence. The shooting is an act of domestic terrorism, the likes of which we saw last take place last week in Colorado Springs, and in Newtown, and in Aurora, and in Virginia. Gun violence has been a hot-button debate amongst gun owners and adversaries alike, and with an election cycle in full swing, it's stayed at the forefront of the conversation. In a number that should absolutely shock you, President Obama has given 11 speeches on gun violence in America. Eleven. In eight years as president, he's spoken about the U.S.'s problem 11 times. It leaves many of us wondering: If we can't trust our policymakers to protect us and to pass laws to protect us, who can we trust? It's not a sentiment of just a marginalized few, either. It's one we all feel.

In the wake of the shooting, social media erupted once again on the topic of gun violence. Some just needed a place to voice their frustrations, their fears, the ways the American government has failed its citizens. Others took to Twitter to use it as a platform for chance, a call to arms to help rather than hurt. And then there were a few who just didn't know where else to go.

A Call For Change

A Look At The Numbers