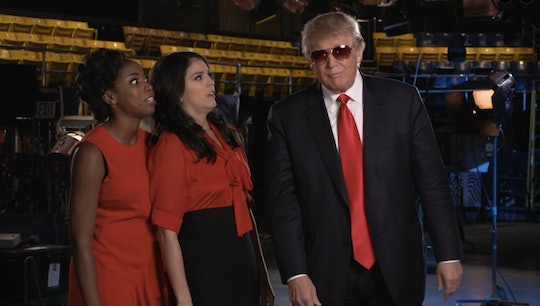 Twitter Hated Trump's 'SNL' Appearance, For A Variety Of Reasons

Anyone who's ever taken the stage in a packed comedy club knows the importance of the warm-up act. So, what happens when the warm-up is a crowd of protestors yelling "Dump Trump"? In the case of Saturday night's episode of Saturday Night Live, it was one of many reasons Twitter did not love Trump's SNL appearance, and it seems like that was mostly but not entirely The Donald's fault. The criticism focused on lots of different aspects of the show — his casual mention of the fact that he owns a gun, the fact that SNL invited Trump to host at all in light of his comments about immigrants and women, the fact his dancing was only as good as Drake (not a compliment, Drake, but I'd totally still date you), and the fact that he was at various points upstaged by Larry David, Leslie Jones, and his own daughter, Ivanka Trump. Many felt that SNL just went too easy on Trump. But overall, the consensus seemed to be that the episode simply wasn't that funny.

Granted, Trump isn't a trained comedian, but he's certainly a performer who basks in the spotlight, if the GOP debates and his Twitter rants are any indication. And when that call, "Live from New York..." goes out, you're basically opening yourself up to public commentary. Here are some tweets that demonstrate how much Twitter was not feeling this week's show:

More Like This
All The Reasons Why You Might Have A C-Section
What Is Monkeypox & Should You Be Worried? Here’s What You Need To Know
Here’s What Sam’s Club’s Memorial Day Store Hours Look Like This Year
Here’s What Time You Can Expect BJ’s To Open & Close On Memorial Day