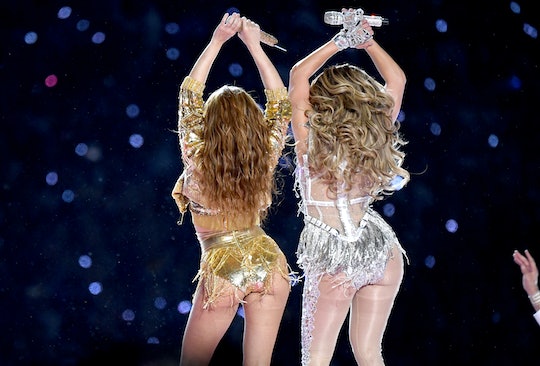 “Uncomfortable.” This was the word that stood out to me upon reading the slew of comments in a local community Facebook thread on Super Bowl night in my mostly white, mostly liberal, upper-middle class New Jersey neighborhood. The second thing that stood out: all the comments of offense and horror were coming from middle-aged white women.

These women gathered online immediately upon the completion of the Super Bowl halftime show to blurt out their disgust for the performances and bodies of two iconic Latina performers, mothers themselves, Jennifer Lopez, aka J. Lo (50), and Shakira (43). And Sunday night would not be the last time I’d see that disgust. Over the last couple of days, the consistency with which white women continue to express "discomfort" at the sight of these two women of color dancing has only increased, and with it, cries of “fear” about some forced-upon loss of innocence to their vulnerable children. This discomfort and fear eventually garnered more support among their groups and turned to rage. “Disgusting!” “Trashy!” “Slutty!”

This vitriol was in contrast to the commentary and conversations coming from my Latinx community. “So proud.” “Beautiful.” “Important.” “Significant.”

It was also not surprising.

The policing of Black and brown bodies is as old as slavery and colonialism itself. Our bodies have long been regarded as dangerous weapons that lure otherwise faithful white men from their marital beds; our wombs serving as thieves of government checks stolen from more deserving citizens; our curves are dangerous distractions that serve only to pollute the innocent minds of young boys and girls. Where the Black and brown man’s body is a symbol of criminality and violence, our bodies — and how we move and dress them — have historically been labeled as having more sinister and vulgar intentions.

While many performers before these beloved icons of Latino pride and pop culture have dressed in similar if not “worse” fashion, there is a special kind of hostility that is reserved for women of color, as was the case when Beyoncé performed in 2013 (too sexy!) and in 2016 (too political!). (And it’s not unnoteworthy that, while Gloria Estefan and Christina Aguilera have both performed during past Super Bowls, there had never before been a Latinx headliner at halftime.)

I try, any chance I get, to dance with my boys, eagerly chipping away at the inheritance of stagnant, rigid motions that is the price we pay for assimilation...

It is the kind of rage that easily unites white women with misogyny under the guise of family values and moral preservation and protection. And it is entrenched in racism and cultural ignorance.

The “vulgar gyrating” and “vagina wagging,” as described by some, were in fact dance moves that embedded in the African influences of our heritage. They have historically served as a form of expression and communication where words do not. Our moves, from the twerking to the swaying of our hips, have served to both celebrate and mourn, worship and honor. As children we have grown watching our mothers, and our mothers’ mothers sway and groove, bump and lock their hips and curves at parties or in front of the stove as they cooked. The fluid way in which we move and the ease with which we embrace our femininity is us and our freedom.

I have often grabbed the hands of my own sons, so vastly separated from the customs of my people as second-generation Americans, and tried to teach their hips and pelvises to move in ways that seemed far more natural and intuitive for those more directly connected to the soil of our motherland. I try, any chance I get, to dance with my boys, eagerly chipping away at the inheritance of stagnant, rigid motions that is the price we pay for assimilation, the cost of colonist influence.

Uncomfortable at the moves and well-choreographed motions that served to communicate both the joy and the pain of our Latinx community during the few minutes of freedom we were given to do so. Uncomfortable at the pain of watching our children being put in cages, the pain of our Puerto Rican brothers and sisters ignored and exploited by this government and their fellow American citizens, combined with the powerful show of both our strength and our endurance.

We are proud of Shakira and J. Lo. We are thrilled at the representation of our language and culture on such a massive stage. We raise our fists in protest of the crimes against our people and in unison for the statements expressed and made on this night. Esa noche era nuestra y la abrazamos con orgullo y honor.

There are a lot of NFL-related things worthy not just of our discomfort, but of our rage. Consider this: The NFL production and filming crew is responsible for how they capture and portray every player, artist, and cheerleader to the TV audience. If “all that crotch” was so upsetting, demand better from the NFL’s production team and photographers who seem obsessed with it exclusively when it comes to women. Consider the NFL’s complicity in domestic violence at the hands of their players. Consider their treatment of Colin Kaepernick. Consider even the horrific head injuries associated with this violent game that we push our kids into — does chronic traumatic encephalopathy make you “uncomfortable?”

The list goes on and on, from player abuse to sex trafficking, but the point is there are more important issues to be uncomfortable with than J. Lo and her pole.

We can’t make others comfortable, especially white women. That rhythm that so offends is in our blood. We are born with it. It’s a gift from our mamis and our abuelas who can still move like that. These hips, breasts, asses are the gifts we inherited from the gods and santos. White women can feign humility and concern, but it’s nothing more than jealousy. They can take to their keyboards under the impression that their judgement and policing of our bodies is not a manifestation of how those magnificent bodies threaten them. But we know the truth.

It isn’t our responsibility to accommodate “discomfort.” We might be able to light a few candles, plea to a few santos to consider their unfortunate situation and maybe allow them limited access to a Carnival and unlimited history books for cultural reference and education. But we can ask one thing: Stop policing women’s bodies, especially those of women of color. And may your children, despite your best efforts, learn to dance.

Editor's note: This post has been updated to clarify the years of Beyoncé's Super Bowl performances.