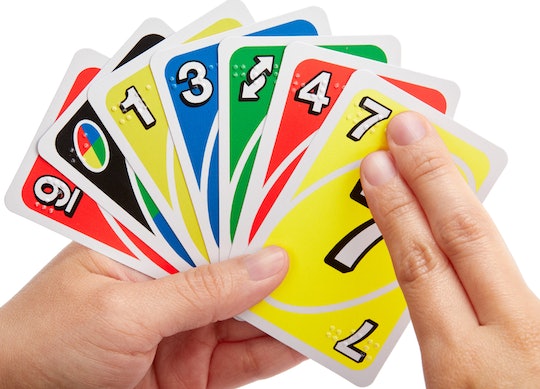 Now There's A Braille Version Of UNO, & It's A Game-Changer

You’re probably already familiar with UNO®, the classic, colored-card game that’s been a family favorite for decades. This fun, fast-paced activity just got more accessible to everyone because now the company is making their first ever UNO deck with braille. Made in partnership between Mattel (the parent company of UNO) and the National Federation of the Blind, UNO Braille features braille on the front and back of each card, but otherwise the deck looks the same as it always has, which is awesome because it allows people who are blind and sighted to seamlessly play together.

My family used to turn to UNO on rainy vacation days when we were stuck inside with a TV that only got three channels, one of which played infomercials on a loop. The thing I remember most about UNO was that everyone could play together; my great grandmother who was almost 90 and my 5-year-old cousin would go head-to-head. While it’s been an age-inclusive game since its inception, in 2017 UNO was re-imagined to become inclusive for folks with colorblindness; this iteration of the game was called UNO ColorADD. With the latest edition, Mattel is once again showing their commitment to providing entertainment for all.

“UNO Braille is doing more than making this beloved game more accessible. It’s also helping promote the importance and normalcy of braille by putting it in places people might not expect, and integrating it into the play of blind children,” Mark Riccobono, President of the National Federation of the Blind, said in a press release for the game. It's "a truly meaningful moment for our community," he said.

The inclusion goes beyond just braille cards; players are directed to UNObraille.com which offers playing instructions in .BRF, a file format that supports the reading of braille. You can also access voice instructions using Google Home and Alexa (I knew she was good for something other than asking me Jeopardy questions and awkwardly misunderstanding who I’m trying to call).

As a sighted person, it can be easy to forget how often the blind community can be left out of everyday activities simply because the world hasn’t caught up yet; I take for granted that when I walk into a store, I can pull any game off the shelf and go home and play it right away. This isn’t the case for everyone, and “the blind community has spent hours creating modified, braille-friendly versions of UNO and other popular games by hand,” said a company publicist in an email.

While it may seem like a small step, offering a popular game in braille marks a humble yet important step toward a more inclusive world.

“Anytime we can find anything that’s accessible or adapted, already done and already made, it sounds very… cheesy and simple, but it’s the best feeling ever,” a mother whose daughter is blind says in a press video for UNO Braille.

Many games that are designed to be accessible are made so that only readers of braille can play; however, the newest iteration of UNO is rare in that it allows all players to sit down together and use the same deck. They’ve marketed the cards with cost-inclusion in mind too; the game will be widely available at Target for an attainable price-point of just $10.