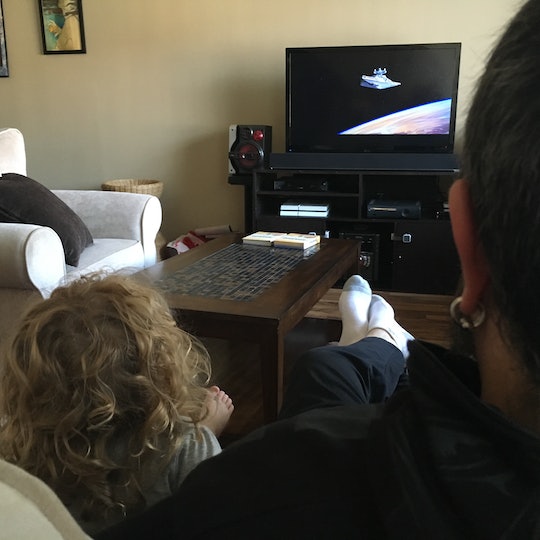 Watching 'Star Wars' With My Toddler Was Nothing Like I Expected

My husband and I are geeks, and proud of it. We spend our Saturdays watching Doctor Who, and we’ve planned entire vacations around things like the opening of the Wizarding World of Harry Potter — in Universal Studios, Florida. So like any tried-and-true nerds, we have an affinity toward Star Wars. Actually, scratch that: I enjoy the series and my husband is obsessed. And naturally, we couldn’t wait to watch Star Wars with our daughter. Now that she's 2-and-half — with the release of The Force Awakens — we decided it was time.

Before we go further, I should admit that we skipped episodes one through three with her. We had our reasons (aside from their total and complete inferiority). My husband and I are early '80s babies. We were too young to see the original films in theaters, and too old to truly appreciate the prequels. Our Star Wars movies involved sets and puppets and practical effects and not pod races. These were the ones we wanted to share with our offspring.

So on a cool November afternoon, we began. We could have bundled up and gone to the park (the weather was nice!), but instead we stayed in. We turned down the lights and turned the volume up. We wanted to truly set the atmosphere, and as soon as the 20th Century Fox logo appeared, I could feel my heart racing. I was bouncing up and down like a kid on Christmas, and I couldn’t wait to see my daughter’s face. Would she like the movie as much as her parents? Would it be too intense, or too scary? Or would she find it boring, like I did at a young age? (When I was her age, I was too into the Disney Princesses, Care Bears, Zoobilee Zoo, and Pound Puppies to care about “the Force,” so really, it was a toss up.) I worried, like anyone does, about introducing someone to something my partner and I love so much. If we let her into this world, how would it go? It's not like I could blame her for hating the film, but I'll admit that I was terrified she would.

Turns out watching Star Wars as a family with our 2 year old was nothing like I expected: it was better.

The moment the opening credits began — as soon as the music started playing and the prologue started rolling — she was captivated. I watched her little eyes light up. She turned to her father and then back to the screen. I listened as he read her the story. Admittedly, she had no idea what he was talking about, but she listened all the same, and I felt a strange tinge of parental pride and love, because nothing is cuter (or sweeter) than watching your partner share his childhood obsession with his own offspring.

And when Leia was revealed for the first time, the movie took on a whole new (and hilarious) tone. Our daughter said:

For the record, I look nothing like Princess Leia. For a few years I did sport my hair in doughnut-like buns, but they were messy and comprised of bright colors — my own personal “nod” to Clementine from Eternal Sunshine of the Spotless Mind. However, I was Leia this Halloween. (My daughter was Captain Phasma, and my husband was Boba Fett ... on his, um, day off.) For a few hours, I wore a brunette wig and a thin white gown, and it seemed my daughter hadn’t forgotten. In fact, three movies, multiple hairstyles, and innumerable outfits later, my daughter remains convinced Mommy is in the movie. (I'm kind of OK with letting this fantasy drag on, because who wouldn't want to be the the feminist hero, Leia?)

My daughter watched with wide eyes as Darth Vader — aka “Dart Vada” — took over the screen, her little feet kicked with excitement when Chewbacca came on screen, and by the time we got to Return of the Jedi, she was screaming with excitement as soon as she saw the opening crawl.

She was a fan.

Her father and I were thrilled (and not only because it gives us an alternative to Frozen or Sofia or Finding Nemo), but because Star Wars is more than simple sci-fi flick. It is more than lightsaber battles and intergalactic war, and Star Wars is ripe with life lessons. The path of the Jedi teaches patience, something my toddler and I lack. Yoda — everyone’s favorite “little dude” — reminds us size doesn’t really matter, and everyone has the potential to accomplish great things. And appearances can be deceiving, i.e. never underestimate Ewoks or discount an enslaved chick in a “barely there” bikini. (I know, I know. Star Wars' path toward feminist has been a constant topic, but the series boasts some incredibly strong and heroic female characters, which is something I appreciate — especially with a little girl.)

We'd spent all this time worried about how to get our kid excited for Star Wars, and turns out we didn't need to: it happened naturally.

When all was said and done, the entire experience came down to one — well two — words. My partner and I were eager to find out what our daughter thought after we'd introduced her to the Force, and welcomed her with open arms inside our world. When we asked you know what she said?

Well said, kid. Well said. And you’re in luck: there will be so many more.