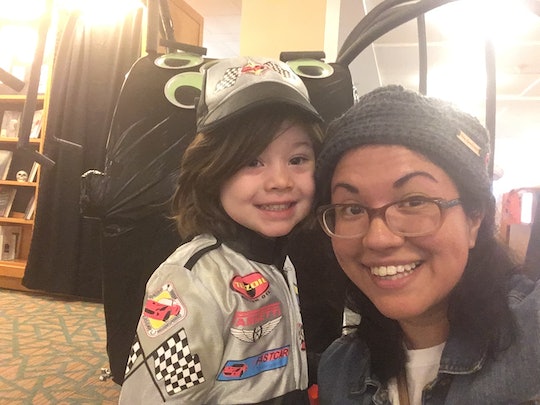 Holidays like Halloween are supposed to focus on having fun. You’re supposed to enjoy searching for the right costume that’s spooky or cool or somewhere in between. You’re supposed to attend parties with friends or go trick-or-treating. So why the need to put so much gender-based pressure on kids? And on a day that’s supposed to focus on make-believe? The sexist nonsense revolving around costumes for young girls has been discussed at great length as of late, which is awesome, but we really need to talk about what we expect from boys on Halloween, too.

On Halloween there's a palpable pressure for little girls to grow up fast and be “sexy," or at the very least "pretty" and, as a result, aesthetically pleasing. It’s a pressure that’s present year-round, to be sure, but is especially noticeable on Halloween when you're skimming the costume aisle and your options, even scary options, appear "quaint" and "pretty" and "soft." Do we ask little boys to appear appealing or "cute" in their costumes when they carve pumpkins? Absolutely not. We don't ask that their costumes are attractive before they're scary, or cute before they're festive.

But little boys are still pressured to appear a certain way on Halloween, too. True to form, toxic masculinity and a patriarchal culture hurts young men as much as it hurts young women.

Today's superhero is too much like an action hero who participates in non-stop violence; he's aggressive, sarcastic and rarely speaks to the virtue of doing good for humanity.

Eventually, and thankfully, I found a racing suit sans fake muscles. It came with a few "sponsor stickers" and a little checkered flag and I figured, well, it beat the alternative. But even though I had achieved my overall goal and was able to present a race car driver costume to my elated child, I was appalled at how difficult it was to find a "boy costume" that didn't have fake muscles attached to it. Just take a look at any superhero costumes marketed to little boys and you'll see what I mean. I'm sorry, but even in the land of make-believe a 4-year-old child shouldn't have a six pack.

According to a 2010 study presented by researchers at the American Psychological Association's annual convention, the hyper-masculine images and depictions of superheroes are actually hurting little boys' mental health. "Today's superhero is too much like an action hero who participates in non-stop violence; he's aggressive, sarcastic and rarely speaks to the virtue of doing good for humanity," Psychologist Sharon Lam explained. "When not in superhero costume, these men, like Ironman, exploit women, flaunt bling and convey their manhood with high-powered guns." These Halloween costumes are packaged cultural ideals of masculinity, and every year our sons are forced to choose from them.

Go to just about any costume store and you’ll notice a few more subtle (and not so subtle) differences between boys and girls costumes, too. The majority of “scary” outfits are piled into the boys section, and most of the weaponry is as well (like scythe, axes, swords, lightsabers, hammers, guns — you name it). Costumes that at least celebrate violence or fear are much easier to find in the "boy" section, letting our sons know that society expects them to be big and tough, with big muscles, and perhaps even violent and scary.

My son had to venture to the "girl section" for a chance to be what he wanted to be, not what society expects him to be.

While we seem perfectly capable of suspending reality and dressing up as a our favorite characters on Halloween, we, as a culture, are unable to get rid of toxic masculinity on the scariest day of the year. These messages, perpetuated by the costume selection chosen for them, encourage boys to push aside their fears and shirk any desire for costumes that are perhaps more colorful or less aggressive.

Last year my son decided to be a kitten for Halloween; a costume that, let’s face it, his peers are going to consider "girly" the older they all get. I was only able to finally find him some kitty ears in the girls’ section, too, which, again, highlights the kind of costumes our culture has arbitrarily decided is best or "appropriate" for boys, and which costumes are ideal for girls. My son had to venture to the "girl section" for a chance to be what he wanted to be, not what society expects him to be.

It’s 2018 and children are still being forced into rigid gender roles, even on the one holiday where you’re literally allowed and encouraged to be whoever you want to be. Sexism and toxic masculinity continue to perpetuate themselves by way of Halloween costumes, activities, and attitudes. Much has been written about the complete nonsense that is girls’ sexy Halloween costumes, but we often forget the more subtle ways we try to box boys in on Halloween, too. As parents, we need to do our best to challenge these notions by reminding our children that gender is a social construct, that boys and men don't need to grow up to be aggressive and wholly fearless creatures, and that costumes should be about dressing up in something you find fun and that makes you happy.