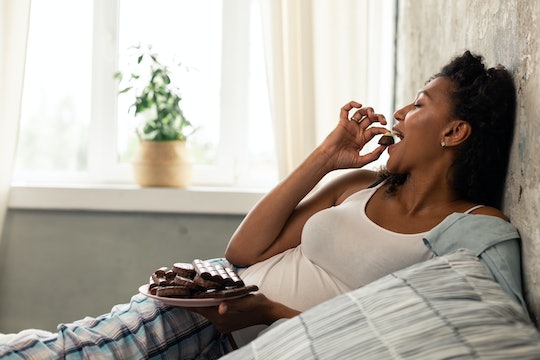 If You're Craving Comfort Food, Mercury Retrograde Might Be To Blame

If you’re feeling hungry all the time lately, blame it on astrological influences. Mercury Retrograde begins on February 18 and will last until March 10, which gives you three weeks of wonkiness (and cravings) to contend with. If you suddenly find yourself craving comfort foods, you might wonder: What do people eat during Mercury Retrograde?

If you’re not astrologically inclined, you might not know what exactly Mercury retrograde is. Much like its name suggests, this term refers to when the planet appears to move backward (veering east to west as opposed to west to east) when viewed from Earth, AstrologyZone.com reported. Since it’s an optical illusion, you might think that it couldn’t impact people’s perceptions about things — oh, but it does.

See, Mercury is responsible for communication, travel, electronics, information, and (yowza) clear thinking, according to Horoscope.com. So when it’s in retrograde, everything slows down (and frankly, gets kind of screwy). This switch can affect anything from relationships to productivity — even your appetite. “Mercury retrograde can affect people's eating habits because it directly impacts whether people feel heard or not,” Jaya Jaya Myra, an astrologer and wellness lifestyle expert, tells Romper. “Since it can impact communication, this means that conversations become delayed, perceived in a way you may not have intended, or that you don't get the outcome you had hoped for. Whenever we don't feel heard or communication doesn't go our way, it's normal to crave comfort foods, which often include carbs and sweets.”

DoorDash analyzed the top foods that people ordered during past Mercury retrogrades, and no surprise, comfort foods were the clear winner. According to the results, kid-friendly faves french fries and chicken nuggets were the most popular foods ordered, followed by quesadillas. Bacon cheeseburgers and grilled cheese sandwiches also were commonly requested.

As for sweets, well, DoorDash delivered a stunning amount of sweets during previous Mercury retrograde events. In fact, sweets saw a spike in orders of over 170%. For example, requests for chocolate chip cookies were up 173%, while ice cream spiked 73%. And it seems that some states feel the retrograde more than others — DoorDash reported a significant boost in sales from states like Montana, Maryland, and California.

So, as we enter the first Mercury in retrograde of 2020, remember to keep calm, be careful about your communication — and keep your pantry stocked with comfort foods until the astrological event is over.