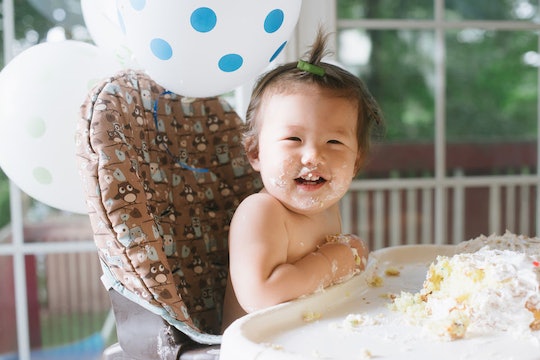 Honestly, You Can Do Whatever You Want For Your Kid's 1st Birthday

For my son’s first birthday party, I figured you only turn one once, so we should go big. My husband didn’t agree, and it was a bit of a point of contention until after the party occurred. To be fair, he was right in the end. Twenty-five people were way too many to have at his party. In my defense, I really didn’t think everyone I invited would come. But apparently to a lot of people, first birthdays are a big deal. So it’s understandable that so many moms find themselves frantically Googling: “What do you do for a first birthday?”

Obviously, it depends on your family dynamic and what both you and your partner want to do (sorry, Greg). The Saturday after our son Jack’s actual birthday, we had 25 of our friends and family over to our teeny tiny house for burgers, hot dogs, a giant T-Rex sprinkler, a baby splash pad, and a water table in our large backyard. The party was a rock and roll theme — like Jack’s nursery — and I had "rock" candy (which nobody ate) “rockstar sunglasses” (which nobody really cared about), and little guitars on top of the cupcakes and his smash cake — which people did like.

Getting back to that too-long guest list, this is my warning to all of you: Assume everyone you invite to your child’s first birthday will come. Even if they don’t have children of their own, or if they’re from out of state. I hated that I felt like I couldn't talk to everyone and like I had to rush around. Jack had fun, though, and he loved playing in the water and seeing all the people, so that made everything worth it.

If, however, you feel like throwing a big bash at your house is a waste of money, or you don’t have the space, or you don’t feel like entertaining that many people, there's no need to feel forced into hosting a party: Maybe an outing for your family is the way to go.

For Jack’s actual birthday, I had a Groupon for our city zoo — which is conveniently also five minutes down the street from our house — and we got there right when it opened so it wasn’t insanely crowded. Jack loves to look at anything and everything, and he had a blast looking at the animals. (If I’m being honest, I think he enjoyed looking at the people more.) Plus, he adored the carousel and splash pad they had there and both were included in the ticket price.

We also took him to the Children’s Museum the day before with the money his Great Grandaddy gave him for his birthday. (So thanks, Great Grandaddy!) Jack had a blast and I highly recommend a children's museum where you live, whether it's a family outing to celebrate their first birthday or just something fun to do. The museum has so many educational activities that are super fun, for toddlers and older kids.

If an outing or big party isn’t in the cards, you can make your little one's day just as special with a small, meaningful gathering. Sarah, a mom and new business owner of a traveling photo booth company, chose a sweet treat as the center of her daughter's simple but super fun celebration.

"With our crazy year we wanted to keep our daughter's birthday low key, and we decided to let her have ice cream — her first dessert. So we all went together to Jeni's Splendid Ice Creams and I took a ton of pictures. And when she got up from her nap I sang happy birthday to her, and we had a big bouquet of balloons and her gifts all waiting for her — a few gifts sent from family, and a few from us," she says. "We also had a calendar that my partner and I filled out over the first year of her life. So after celebrating and just having special, uninterrupted family time we put her to bed. Then my partner and I had a bottle of champagne and went through the entire calendar together."

No matter what you decide to do for a first birthday, you really can’t go wrong as long as it’s something both you and your partner want to do (again, sorry, Greg), and your kid has fun. Whether you throw a huge party, go on an outing as a family, choose to keep it super intimate, have a smash cake, or serve fruit, every family is different. What’s really important is that you celebrate because you made it through a year! Here are some ideas to get your started for the big day, from tiny added touches to keepsake suggestions and more.