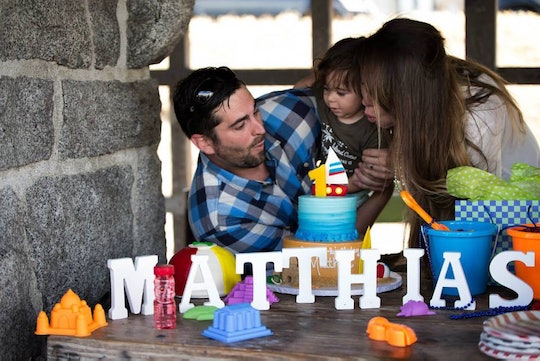 If someone would have told me, just three years ago, that I would spend an obscene amount of money on my kid's first birthday party, I would've told them they must have me confused with someone else. After all, I was never going to have kids, thank you very much. They would've been right, though, and I would've had to eat some major crow. I went all-out for my kid's first birthday party, but that won't be something I"ll be apologizing for anytime soon (or ever, actually).

In my short time as a mother, I've become painfully aware of just how little life gives a you-know-what about your plans. I never wanted to have children, then I found out I was pregnant with twins and suddenly felt this innate, deep-in-between-my-ribs, acute realization that I could not only be a mother, I wanted to be a mother. I planned to raise two babies, simultaneously, then felt the helplessness that accompanies a doctor telling you that for reasons beyond your control, one of your baby's has a heart that's no longer beating. I planned to give birth to two babies who would cry and breastfeed immediately, but I endured bringing a baby into the world that was alive, and a baby that wasn't. I had planned to love my son immediately and be filled with this overwhelming, all-encompassing connection, but postpartum depression covered me in a weight and sadness and darkness the likes of which I've never experienced before.

In other words, the months leading up to and the first year of my son's life, were nothing like what I planned. However, that first birthday party was something I could plan, and I wanted to plan something so beautiful, so over-the-top, so "perfect," that everything my partner and I went through the year before would be nothing but a figment of our collective imaginations. I couldn't re-write the past or what I had experienced as a pregnant woman or a new mother, but I could fill in the gaps with a celebratory day that was all about my son, my partner, and myself. So, even though I don't need to give an explanation, here are just a few reasons why I went "overboard" for my son's first birthday party, and why I don't regret a single second of it: