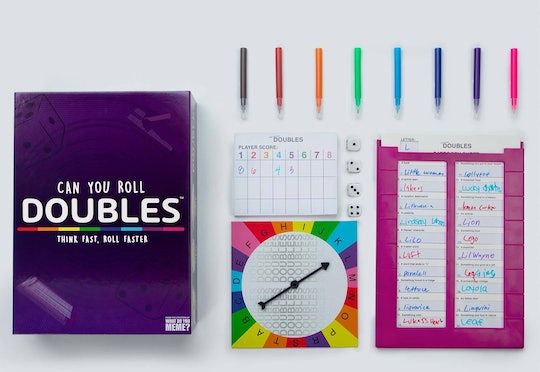 What Do You Meme?

The Makers Of What Do You Meme? Have 2 New Games Your Whole Family Is Gonna Love

I think most families would agree that a family game night is so much more memorable than zoning out together on the couch, watching Secret Life of Pets 2 for the umpteenth time. The trouble is, finding a game that isn't baffling/traumatizing for the kiddos but also doesn't bore Mom and Dad to tears can be pretty challenging. That's what makes two new offerings from the makers of What Do You Meme? so appealing: Doubles! and Party Bowl are simple enough for kids to master, but tricky enough to keep grown-ups hooked.

Both games come from the creators of the very popular adult game What Do You Meme? If you're not familiar, the hilarious game involves players competing to match the funniest captions to photos. (Which is one of those things we do in 2019 that I like to imagine explaining to the ghost of Oscar Wilde. "So you just match a caption to a photo? And it's called a... meeeem?" Other things I'd like to show Oscar Wilde's ghost: GIFs and The Real Housewives.)

While the boxes for both Party Bowl and Doubles! recommend the games for children 12 and up, the creators say they're fun for kids as young as 8. They're billed as "customizable," and can be "as risqué (or not) as you like." (And they're easy on the wallet, as well. Party Bowl retails for $17 on Amazon, while Doubles! is $20.)

The first one — Party Bowl — is basically a more layered version of charades that's played in three separate rounds. With each round, it becomes more challenging, and a bit sillier. For the first round, players use prompt cards to describe a word without actually saying the word. Once the words are guessed, they go back into the bowl, and for the second round, the words must be described, but using only one word. For the last round, players can't speak at all, and the words are described charades-style. I must say it sounds very active and funny, which is my favorite kind of game. (Get thee to hell, dreaded Monopoly... ) And there's really nothing funnier than watching little kids do charades, no? I still cherish the memory of my 5-year-old brother imitating a T Rex by tucking his arms completely inside his t-shirt.

The second game, Doubles!, has a beat-the-clock element to it, which tends to be a big hit with kids. The premise is simple: someone spins the spinner, and whatever letter it lands on is the letter that will be used for that round. The player then has to come up with something for each category on the category sheet starting with that letter. For example, if it's letter C, it would be things like — A Musician: Ciara. A Movie: Carrie. etc.

There are twenty things on the list, and the goal is to fill out as many as you can before the person to your left rolls doubles on the dice. It sounds like a simple enough premise, but I think it's also one of those games that instantly becomes hard the second you try to play it. (Maybe it's just my mom brain, but when pressed to think of something blue that begins with the letter C, I felt stumped. Choking victim?)

This fall, when it starts to get chilly out, it might be nice to gather up all of the i-Pads, i-Phones, and various other i-Objects, and instead of zoning out, come together for some laughs and good 'ol familial interaction. Hopefully it will go better than the last time I tried to play Twister with my son, when we both ended up with busted lips.