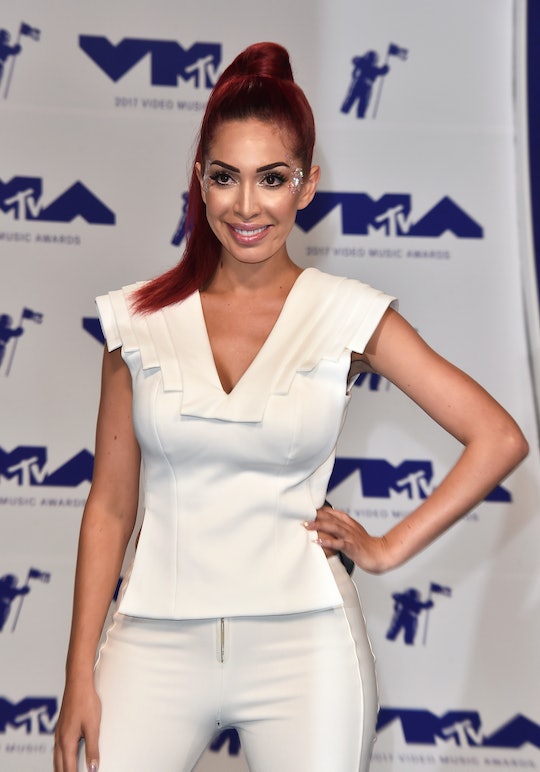 Farrah Abraham first came into America's consciousness back in 2009, when she starred in an episode of 16 and Pregnant. Now, nearly a decade later, the television personality has made quite the name for herself. She's appeared on several other reality shows (namely, Teen Mom OG), dipped into several other art forms, and been at the center of a few controversies. And with Abraham in the news this week (more on that in a sec), fans of the reality star are undoubtedly wondering: What does Farrah Abraham do now?

In case you've been out of the loop on the whole 16 and Pregnant/Teen Mom/Teen Mom OG canon, here's a news flash: the show is still in production. That's right — Teen Mom OG's seventh season is still airing, and Abraham is one of its stars. However, viewers likely will not see Abraham on the show after this season wraps up.

Last week, Abraham made headlines all around the web for announcing that she is suing Viacom, as reported by The Blast. Viacom owns MTV, the channel that broadcasts 16 and Pregnant as well as Teen Mom. According to court documents obtained by The Blast, Abraham alleged that the shows' executive producer and the production crew, "harassed, humiliated, discriminated against, disrespected, ridiculed, degraded and sex shamed Ms. Abraham recent decision to pursue opportunities in the adult entertainment industry.”

As the outlet explained, Abraham does have a history working in said industry — she released a sex tape in 2013, made appearances at strip clubs, and launched her own sex toy line — but that's no reason to discriminate against someone, especially in a professional setting. Furthermore, in the lawsuit, Abraham claimed that executive producer Morgan J. Freeman allegedly threatened to end her career, in an encounter that caused her to "fear for her life," according to The Blaze.

One week later, on Wednesday, Feb. 28, Abraham confirmed that she will not be attending the Teen Mom OG reunion, scheduled for March 3 and 4 in New York City, as per Us Weekly. “MTV is not allowing me to attend the reunion, and my dad won’t attend if I don’t go. I can’t speak for my mom,” Abraham reportedly told Us Weekly. Furthermore, she also confirmed to the outlet that she will not be returning to Teen Mom OG.

Romper's request for comment from both the network and Abraham was not immediately returned, but she provided Us Weekly with the following statement about parting ways with MTV:

I wish them all the best with the show. I’m out on a high note. This is the longest season in history and I’m their biggest star. I can do my own show, but I don’t want to focus on reality TV ... I’m focusing on scripted opportunities, but will always enjoy a good reality TV project. I don’t know what the show is doing. You could take all the girls on all the series, but none can bring or do as much as I do for the series.

The outlet added that Mackenzie McKee from Teen Mom 3 will be joining Teen Mom OG in Abraham's place.

It's no surprise that Abraham wants to take a break from reality TV, considering how much reality TV experience she has on her resume (rather, her IMDb profile). She has starred on reality shows including Celebrity Big Brother and Couples Therapy, and she has made appearances on others including Dr. Phil, Bethenny, Botched, and Million Dollar Matchmaker.

And in addition to her careers in reality TV and the adult entertainment industry, Abraham has had stints in several other areas. She released an autobiography and a musical album in conjunction with each other, both called My Teenage Dream Ended, in 2012. She's also busy with her daughter Sophia, who recently turned 9.

While it's likely a bummer for fans that they won't see Abraham on future seasons of Teen Mom OG, there's no doubt that she will continue making headlines on whatever she pursues next — and mad money.

More Like This
Kate Middleton's Brother Paid Tribute To Queen Elizabeth With His New Puppy's Name
Exclusive: Watch Hayden Panettiere Talk About Addiction Treatment 4 Months Postpartum
Scarlett Johansson Explained The Meaning Behind Her Son Cosmo's Name
Prince William Was Quick To Remind Someone That He Does School Drop-Off Duty Too